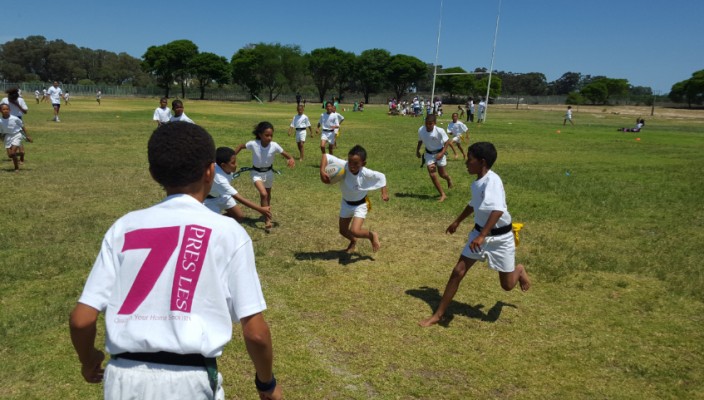 The 6th Edition of the Pres Les Tag Rugby® Festival was successfully delivered this past weekend. The City of Cape Town kindly allowed the Protea Park facility to be used for the event.

The Primary Schools that attended the event were Mamre, Rygersdal (4 time winners), Kerria, Hermes, Berzelia, Saxonsea, Protea Park and Parkview. The High Schools that took part in the event were Robinvale and Atlantis Skills, each entering two teams.

The Pres Les staff assisted by the Tag Rugby®  Association coaches made sure that all the participants, staff and spectators had an enjoyable morning in the sun. “At Pres Les we want to make a difference in the community we operate in. That is why we are so passionate about getting young boys and girls in Atlantis playing Tag Rugby®  and away from drugs and crime,” commented Mr Aubrey Prins,  Pres Les Atlantis Manager.

“This event is one of the most enjoyable and rewarding events we deliver every year. When we started the Adopt a School Programme in 2009 we wanted companies to embrace  the Programme. Our coaches are involved in coaching in the schools throughout  the year. At the final event the sponsoring company gets involved. Every year, without fail, Pres Lesemployees play an active role,  looking after the needs of the children, teachers, coaches and spectators, which was our vision when the programme started,” commented Stuart McConnell, Director of the Association. “A highlight for me is when the staff play the traditional Tag Rugby® game against the coaches. It’s amazing to see the talent they have. This year the coaches won the game 4-2.”

The quality of the Tag Rugby®  on display was some of the best seen at this event. A credit to the Tag Rugby®  Association’s community coach, Lionel April and programme manager, Charl Jansen van Rensburg.

The semi-finals in the Primary School event saw Rygersdal playing Berzelia (a new school on the programme) and in the other semi final Saxonsea played Hermes. Rygersdal and Hermes were both a little too strong for their opposition on the day and made it through to the Final. The Final was an extremely close gameRygersdal took an early lead but then Hermes came back strongly to score in the final minutes of the game securing the trophy as  Pres Les Tag Rugby®  Festival winners for 2015.