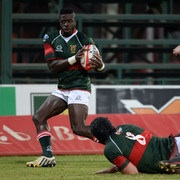 Pressure on as only six pool rounds remain in First Division

The pressure in the Absa Currie Cup First Division looks set to rise significantly this weekend as the reality sets in for most teams that only six rounds of pool matches remain to secure their semifinal places.

With a 10-point lead at the top of the standings, the Steval Pumas will be the least intimidated by the prospect, but for the chasing pack the pressure to hit their straps will undoubtedly rise.

In Friday’s matches the EP Kings host the Down Touch Griffons at the Nelson Mandela Bay Stadium in Port Elizabeth and the Border Bulldogs take on the Steval Pumas at the BCM Stadium in East London. On Saturday the Valke meet the Leopards at the Barnard Stadium in Kempton Park and the Regent Boland Cavaliers battle it out with the SWD Eagles at the Boland Stadium in Wellington.

The Pumas will enter their clash against the Border Bulldogs as overwhelming favourites on form after registering eight consecutive victories and scoring a total of 40 tries. They experienced their first scare of the series against the strengthened EP Kings outfit last week, which saw them secure a narrow one point victory and will be wary of writing off the home team. The fact that Border produced a solid display to go down 36-31 against the second-placed SWD Eagles will undoubtedly fuel this sentiment. The clash will see the return of talented Pumas flyhalf JC Roos, who was a key figure the series last year. He is expected to add a new dimension to their attack.

Given the strength of the EP Kings following the return of their Vodacom Super Rugby players, they too will be tipped as favourites against the Down Touch Griffons. However, with the Griffons coming off an impressive 50-point score last week and the team still within striking range of sneaking into the top four, they will relish the underdog tag.

The Leopards will back themselves to beat the Valke, who are stuck at the foot of the log following one win in eight outings. But injuries to key players like captain Brendon Snyman and vice-captain Morné Hanekom could disrupt the team. Experienced hooker Edgar Marutlulle will lead the side in their absence. The presence of dependable flyhalf Adriaan Engelbrecht and SA Under-20 playmaker Luther Obi, who have been in fantastic form, however, should comfort the skipper. That said, the Valke, have proved that they could score tries, meaning the Leopards need to be solid in that department.

The clash between the SWD Eagles and Regent Boland Cavaliers is expected to be a spectacle as the Eagles are desperate to remain in second place on the log, while the Cavaliers will be determined to climb into the top four. With both teams having shown flair on attack this season, it could be thrilling, but the Eagles, in particular, need to improve their defence to keep alive hopes of a victory after leaking 35 tries in eight matches. Boland, meanwhile, will have to remain disciplined to prevent SWD fullback Justin van Staden from adding to his 71 points so far in the series thanks to his accurate goal-kicking.