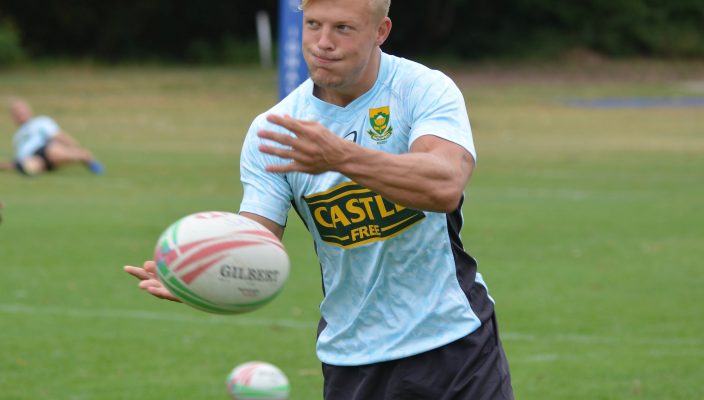 Pretorius looks to improve as he debuts in Singapore

It’s probably fair to say JC Pretorius became a household name for the Springbok Sevens fairly quickly, so much so that it is hard to believe he only played 16 tournaments in the HSBC World Rugby Sevens Series so far.

And as the 24-year-old pointed out, he has not played in the impressive National Stadium or the HSBC Singapore Sevens before.

“I was injured in 2019 when we last played here and missed out on that trip, so I am pretty keen to have a crack at it here in Singapore,” said Pretorius, who has scored 36 tries in 86 matches wearing the Blitzboks’ green and gold.

“I have played all the regular stops, apart from Singapore and Hong Kong, so it will be good to tick this one off too. We are blessed to be able to travel the world and play all over representing our country, something that we will never take for granted.”

Pretorius started his career in Sydney in 2019, and the fresh-faced youngster quickly showed that he was going to become a big name player. When the World Series was cancelled after six tournaments in 2020, Pretorius was duly named in that season’s Dream Team (alongside Selvyn Davids) and since then, he has hardly missed the regular Player of the Tournament Team.

He was named in the Dream Team after the HSBC Canada Sevens in Edmonton in September 2021, and again in December 2021, after both Dubai tournaments.

Although it will always be a case of “team first” for Pretorius, he was not pleased when he missed out on this accolade in both Malaga and Seville during the Spain legs in January.

“I set out some goals for myself this year, as I definitely want to keep improving as a player and by pushing the standards and goals higher and higher, you will get better, I believe. I just want to be the best JC Pretorius I can be.”

The forward was not alone in this reflection and desire: “We had enough time away from the field to reflect and discuss what we want to achieve and how to get there, as individuals and as a team.

“Luckily, we managed to spend some time with family and loved ones as well, and they also contributed to create a positive mindset,” said Pretorius, who hails from Secunda and was schooled in Middelburg, Mpumalanga.

No reference to the Singapore tournament will be complete without the inevitable question regarding the participation of New Zealand and Fiji, and for Pretorius it was no different.

“We are really pleased that they are back, the World Series needs them, as well as Samoa,” he said.

“People were reflecting that our recent successes where without them present, but there was nothing we could do about that, but play our best.

“Now that they are back, we will not change anything, we will still go out and do our processes and implement our game plan as always.”

First seeds South Africa will play USA, Canada and Kenya in Pool A of the tournament, that starts on Saturday.