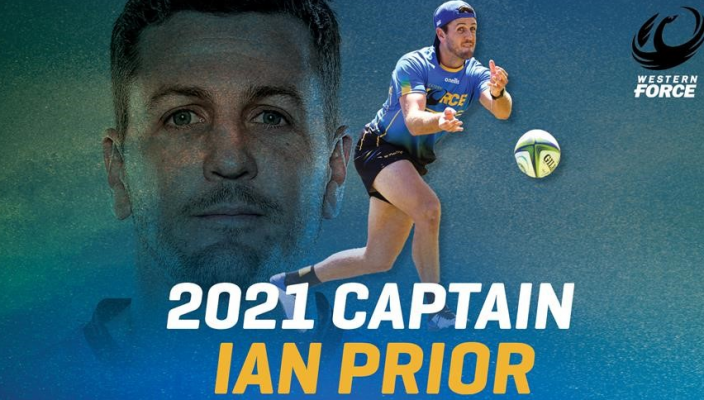 The Western Force is delighted to announce that Ian Prior will remain captain of the club for the 2021 Super Rugby campaign.

This will be the distinguished scrumhalf’s fourth season as captain after taking the reigns in 2018.

With over 70 Force caps to his name since making his debut in 2014 against the ACT Brumbies, Prior has led the club through a transitional phase in the history of the franchise, from World Series Rugby to Global Rapid Rugby and during the 2020 Super Rugby AU campaign.

Prior’s exemplary leadership was embodied by the strong togetherness and never-say-die attitude that was so prevalent during last year’s Super Rugby AU season in such unique and trying circumstances, which led to the number nine being awarded the Force Man Award for 2020 at the Nathan Sharpe Awards Night.

Head Coach Tim Sampson said the decision was one of reward for three years of fantastic captaincy.

“Ian has been superb for the club since arriving here in 2014. He’s been excellent not only on the field, but equally off the field through his support of the club and also importantly throughout the community here in WA,” Sampson explained.

“His calmness is a huge asset. He’s an extremely positive leader who has been a great sounding board for the staff and players alike. His vision and ambitions for the club are aligned with staff which is critical for the club to be successful down the track.

“Continuity is crucial within a club when striving for success and with the level of professionalism and leadership he’s shown in the role since 2017, it was an important decision to have Ian within the key decision-making areas of the program.”

Having relished the role in Super Rugby AU last season, Prior is thrilled to be leading the club again this year.

“It’s extremely humbling to be given the privilege and opportunity to captain the side in 2021,” Prior said.

“I’ve learned so much over the past few years and throughout all the highs and lows, we’ve maintained a family feel and culture that is truly unique to us as a club.

“It’s such an exciting place to be as a player, as our identity as an ambitious, forward-thinking and passionate organisation has taken shape. We all have the responsibility to inspire the next generation of players and engage with the local community, so I can’t wait to continue that development.

“We’ve got a well-balanced squad with fantastic depth, which has created great competition for places. It’s been great to see a number of homegrown pathway players join the team and we’re raring to get the season underway