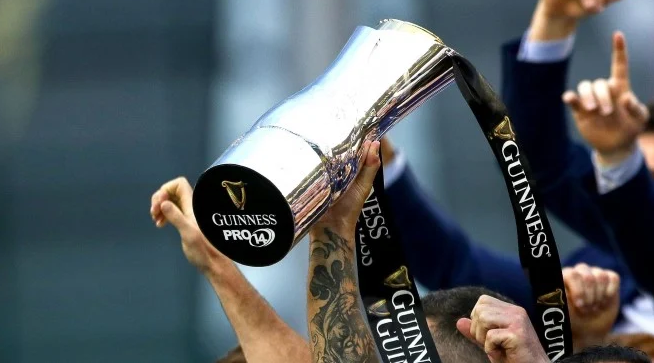 PRO14 RUGBY THANKS GUINNESS FOR SEVEN YEARS OF UNPARALLELED SUPPORT

As PRO14 Rugby prepares to become the United Rugby Championship we wish to thank Guinness and all of our colleagues at Diageo for seven years of unparalleled support of the league as title partners.

Martin Anayi, United Rugby Championship CEO, said: “Guinness have been the longest-serving title partner in the league’s history and their dedication has always been clear to see in their support of club and international rugby. Their partnership with us coincided with some of our league’s greatest days, such as Glasgow Warriors’ first title win in 2015, Connacht’s fairy tale triumph in 2016, Scarlets’ scintillating run to the glory in 2017 and Leinster’s double triumph in 2018.

“During that time, the league spread its wings into South Africa while remaining the home of top-class international players and a platform for Next-Gen talent – many of whom are now internationals in their own right or among our 19 representatives in the British & Irish Lions squad.

“We finish our title-partnership on a high note with Benetton’s Guinness PRO14 Rainbow Cup victory meaning that four of our five participating nations won silverware during Guinness’s time with us. We wish Rory Sheridan and his team at Diageo the very best for the future and thank them for their tremendous support.”


MILESTONES ACHIEVED DURING THE GUINNESS SPONSORSHIP

First destination final held in Belfast in 2015
First major silverware for Glasgow Warriors in 2015
First major silverware for Connacht in 2016
Attendance records set at consecutive finals between 2016 and 2019
2016: BT Murrayfield, 34,500
2017: Aviva Stadium, 45,556
2018: Aviva Stadium, 46,092
2019: Celtic Park, 47,128
A total of 26 players called up to the British & Irish Lions tour to New Zealand
Expansion into South Africa in 2017First double winners in 2018 as Leinster take PRO14 and European titles
The first Guinness Rugby Hotel experience is held at Aviva Stadium for the 2018 final
First final held at a non-rugby stadium in 2019
A total of 22 players receive call-ups for British & Irish Lions tour to South Africa in 2021
First major silverware for Benetton Rugby who lift the Guinness PRO14 Rainbow Cup in June 2021