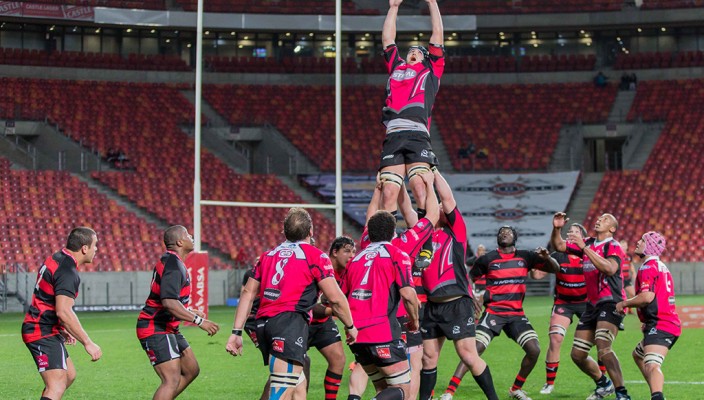 The Steval Pumas and Leopards continued their dominance in the Absa Currie Cup First Division this weekend to retain their places at the top of the log, while the EP Kings and SWD Eagles stayed hot on their heels.

The Pumas produced another stunning display for a 35-5 victory against the Regent Boland Cavaliers in Wellington to stretch their unbeaten run to six matches, while the Leopards outplayed the Border Bulldogs 26-10 in East London to prevent the Pumas from inflating their lead at the top of the table.

In the other matches the EP Kings thumped the Valke 44-18 in Brakpan and the SWD Eagles held on for a 30-25 victory against the Down Touch Griffons in George.

The Steval Pumas were in impressive form in Wellington, with the team being rewarded with five tries for their dominant attack. As expected the opening exchanges were tight as the Regent Boland Cavaliers put up a brave fight following four back-to-back victories. But a yellow card for scrumhalf Zandre Jordaan reduced the team to 14 men and gave the Pumas the advantage they needed to stamp their authority. With the numbers and momentum on the Pumas’ side, Coenie van Wyk and Rosco Speckman crossed the tryline to add to a penalty by flyhalf Carl Bezuidenhout for a 17-0 lead before Jordaan returned to the field. But their dominant forwards continued to place the home team under pressure, which set flank Uzair Cassiem up for the team’s third try minutes later. Jordaan, however, hit back with a try before the break for Boland’s first points and a 22-5 half time score. But unfortunately it proved to be their only points of the match.

The Pumas continued to apply pressure on attack after the break thanks to a balanced display between the forwards and backs. But a solid defensive effort by Boland limited them to only two tries in the second half and a penalty by Tiaan Marx. This victory, however, marked the Pumas sixth of the season and their third bonus-point win.

In East London, a solid kicking performance by Leopards flyhalf Adriaan Engebrecht and a dominant attacking display, in which they outscored the Border Bulldogs three tries to two, earned the visitors their fourth victory of the season. The first half was tightly contested with the Leopards settling for three penalties in the first 30 minutes to open up the scoring. Such was the competitive nature of the half it took a Bulldogs yellow card for the Leopards to score their first try of the match and build a 14-0 lead at the break.

The second half proved to be equally tense, as both teams crossed the tryline twice, but unfortunately for the home team, their ill-discipline in the first half came at the high price of their fifth defeat of the season. The Leopards, meanwhile, retained their second-place standing on the log table, but they remain only three points ahead of the EP Kings and SWD Eagles.

A scintillating kicking display by EP Kings flyhalf Ntabeni Dukisa and a hat-trick of tries by captain and flank Mpho Mbiyozo, meanwhile, led the Port Elizabeth team to an invaluable away-victory against the Valke in Brakpan. In a thrilling first half the Kings dominated possession, which set Mbiyozo up for his first two tries to add to Dukisa’s first-half penalty. The Valke, meanwhile, did well to feed off the scraps for their 10 points in the first half, with Anrich Richter crossing the tryline for their first try.

The teams continued to put their bodies on the line in the second half, which resulted in an epic third quarter, but another three tries by the EP Kings, of which two were scored in the last five minutes of the match, to only one by the Valke sealed the victory for the Eastern Cape side. Such was Dukisa’s influential performance, he earned 19 points with the boot thanks to five conversions and three penalties, and added an extra five thanks to his try, for a personal total of 24 points.

In George, a penalty-riddled first half saw the SWD Eagles take a narrow 16-15 lead against the Down Touch Griffons. Such was the high level of ill-discipline, Eagles flyhalves Justin van Staden slotted over three penalties to add to the only try of the half by wing Alshaun Bock, while all the Griffons’ first-half points were compliments of penalties by flyhalf Louis Strydom.

Two tries by the Eagles to only one by the Griffons in the second half, however, handed the home team an edge and allowed them to remain hot on the heels of the Leopards and EP Kings on the log.