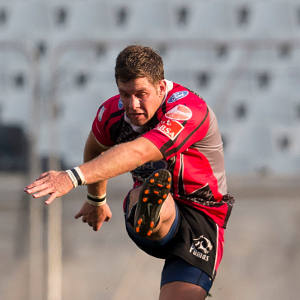 Absa Currie Cup First Division log-leaders the Steval Pumas this past weekend secured the top spot on the log with two rounds of matches remaining as they held on narrowly for their 12th victory in as many matches. This favourable position will guarantee them a home final should they win their semi-final at home in three weekends.

While the Pumas worked their way into a cushy position on the log, the scramble for semi-final places continued with four teams still in the running for the three remaining semi-final spots.

The EP Kings, however, will have an edge in the next two weeks for the other home semi-final as they boast a five point lead over the third-placed Leopards, meaning they need only a bonus-point victory to finish the round robin stages in second place. The fourth-placed SWD Eagles, meanwhile, only trail the Leopards by one point, and boast a seven-point lead over the Regent Boland Cavaliers.

The Cavaliers, however, have a tough match ahead against the Pumas, and if they suffer a defeat, it would in all likelihood deal the killer blow to their semi-final hopes.

In George the SWD Eagles put up a brave fight against the Steval Pumas in the hope of boosting their home semi-final hopes, but their efforts were insufficient as the visitors secured a narrow 28-27 victory. The Eagles started the clash strongly as they out-scored the visitors two tries to one in the first half, while fullback Justin van Staden kicked two penalties to match that by Pumas flyhalf JC Roos. This earned the home side an 18-13 lead at the break.

The Pumas crossed the tryline for their first of their two second-half tries in the 52nd minute, but these efforts were cancelled out by a penalty and drop goal by Van Staden. The log-leaders, however, fought back in the dying minutes with Rosco Speckman crossing the tryline to come within striking range of a victory and they capped this off with a last-minute penalty by JC Roos to seal the 28-27 win.

The EP Kings dominated from the start against the Regent Boland Cavaliers in Wellington and earned three first-half tries and a 19-0 lead for their efforts.

The Kings continued their dominance after the break and earned their bonus point try two minutes in as Stefan Willemse dotted down the ball. This was followed up by two tries in three minutes by Steven Sykes and Cornell du Preez, which pushed the match out of reach for the home team. But with nothing left to lose, the Cavaliers showed immense character and produced a late comeback thanks to two tries by Jason Kriel and one by Ulrich Pretorius to emerge from the match with a respectable score.

The Leopards were made to work hard for their 40-33 victory against the Down Touch Griffons in Potchefstroom as the visitors hung on until the last minute to create an upset. Such was the tight nature of the match it took a try on the stroke of full-time by the Leopards to secure the victory. The teams were closely matched from the outset as the Leopards scored three tries to the Griffons’ two in the first half, which allowed the visitors to enter the break with a 19-14 lead.

The Griffons continued to show their fighting spirit after the break and scored three tries to only two by the Leopards in the first 26 minutes of the half, which levelled the scores at 33-33. The Leopards, however, showed their big match temperament as they fought until the final whistle, which allowed Brendon Snyman to crash over the tryline and seal the victory.  The win allowed the Leopards to leapfrog the Eagles on the log into third position.

In East London the Border Bulldogs staged a second-half comeback from 14-6 down to outplay the Valke for their third victory of the season. In total the Bulldogs scored four tries to only two by the Valke, while fullback Dale Sabbagh kept the scoreboard ticking with three conversions and three penalties to force the match out of the Valke’s range.