The Pumas squandered a golden opportunity to record the best Premier Currie Cup season ever when they narrowly went down 33-32 to the Free State Cheetahs in Bloemfontein on Friday afternoon.

A fifth Currie Cup victory would have been the Pumas’ best result in South Africa’s premier domestic competition and at times it seemed that it was a forgone conclusion.

To be fair, they have had many opportunities to beat the Free State, but their efforts was not accurate enough against opponents they should have put away easily.

Two late tries by Free States flyhalf Robbie Petzer and some elusive running by fullback Clayton Blommetjies was too good for the Pumas defenders.

There were many positive signs during the match which they controlled for almost an hour, a maul try by Frankie Herne, a fine try by the hard-running winger Trompie Pretorius, a try to Willie Engelbrecht after fine inter-play with the other loose-forwards and a try by Justin van Staden which should have been the coup-de-grace.

A dropped pass by Van Staden and a foot into touch by flanker Brian Shabangu, who made up in the second half by some spirited play, eventually cost the Pumas a place into the history book, and a possible place in the competition.

Photo 1: Brian Shabangu was awarded man of the match in the clash against the Cheetahs in Bloemfontein 22 September 2017 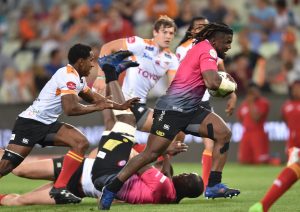