Q & A with Wallaby Mike Harris 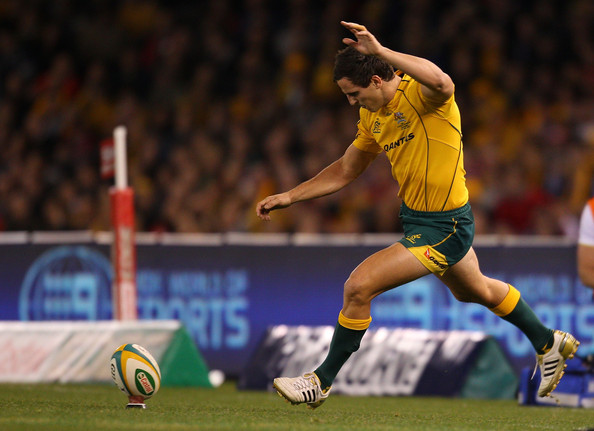 Mike Harris went on to kick twenty-four for twenty-four before missing his first ever kick on goal in Super Rugby. Rightly so, the dynamic Kiwi, who slots in perfectly well at inside centre deserved a call-up to the Australian national side.

Considered somewhat of a “freak” at the best of times Harris latest exploit saw him for covert a last minute shot on goal against Wales in Melbourne at Etihad Stadium to break Welsh hearts across the world and win a game the Wallabies deserved to lose.

Mike Harris was kind enough to take some time from his hectic schedule to have a Q & A session win Samantha Evans and Mandi Venter.

Q: You boys travel around quite a bit and all seem to be pretty good mates. Funniest moment while on tour this year so far?

A: Yea we’ve obviously become pretty close. With the amount of travel and rooming with one another, that creates that bond. Funniest moment on tour this year would have to be in Durban playing a game called ‘Reds Idol’. The game entails putting noise canceling head phones on, turning the iPod up, closing your eyes and singing with the boys recording it haha. We were in hysterics. Jono Lance was best and nailed Tracy Chapman ‘Fast Car’. Hopefully one day we can get it up on Twitter or YouTube.

Q: Your time in SA was cut short due to injury but you did get to spend a week in Durban. What do you think of the city and what did you do in your spare time while you were there?

A: Yea I was absolutely gutted to have been sent home after tearing my hamstring, but I loved Durban and the fine dining of Umhlanga. Also, the wave pool at Gateway was extremely fun although a bit of practice is needed I think.

Q: The injury you sustained against the Sharks set you back a few weeks. How did you keep motivated during this time?

A: Yea 5 weeks out was really hard, and I hate watching. Especially when the team wasn’t going so well results wise. That was a big motivator to get back ASAP but I’m always desperate to be on the pitch. We all are.

Q: Congrats on getting selected to wear the green and gold…Where were you when you found out you’d made the Wallaby squad and what did you do to celebrate?

A: Thank you! Funny story, I was actually getting my nose scanned at the time I got the call, which has taken a fair beating over the past month. Think it’s looking worse then our skipper James Horwill’s now. It’s been such a busy schedule so I haven’t really had a chance to celebrate.

Q: As a Kiwi, you must have had All Black ambitions growing up…However, considering you have an Australian grandmother, was the Wallaby option always at the back of your mind?

A: Yea, I’ve always known that the Wallabies was a genuine option for me and couldn’t be happier in being selected.

Q: You made your test debut for the Wallabies in shocking conditions. It looked freezing. What were your thoughts as you ran out onto the field?

A: Ran out feeling very proud and was quite emotional singing the national anthem. Hands down, the worst conditions I’ve ever played in and struggled to stay warm the whole game. It’s something I will never forget being my first cap for Australia.

A: 12 with the goal kicking duties

Q: A movie is being made of your life. Which actor plays you?

A: I’d prefer not to have a movie made on my life. For a look-a-like you’d have to ask my team mates.

Q: How do you take your coffee?

A: People ‘pork chopping’ themselves.(Colloquial phrase in Australia to “carry on like a pork chop”, meaning that someone is behaving in a silly or stupid way)

Q: Are you a shower singer? If so, what’s your go to song?

A: If I’m in the mood, sure. Whatever I’m liking at the time. Recently it’s six60, the Rubens and Hilltop Hoods.

A: On my couch watching Kelly surf.

Q: What would we find in your fridge right now?

A: Probably a lot of food that’s been rotting away over past month while I’ve been in camp with the Wallabies. Time for a clean out I’d imagine.

Q: Do you have any tattoos? If not, would you consider getting one?

A: Yes I do, it’s a 2011 Queensland Reds championship tattoo.

Q: What sporting event, anywhere in the world, would you love to attend (non-rugby…eg: Super Bowl, Wimbledon etc)

Q: What does 10 year old Mike Harris want to be when he’s all grown up?

A: A Professional rugby player, doing what he loves for a living.

Q: Pressure kick of note last night against the Welsh! How do you mentally prepare yourself for a kick like that?

A: For me its about trying to stay as relaxed as possible and treat it as any other kick. Don’t let the occasion get to you and keep that little voice in your head positive. 100percent of your focus needs to be in the process and the outcome will take care of itself.