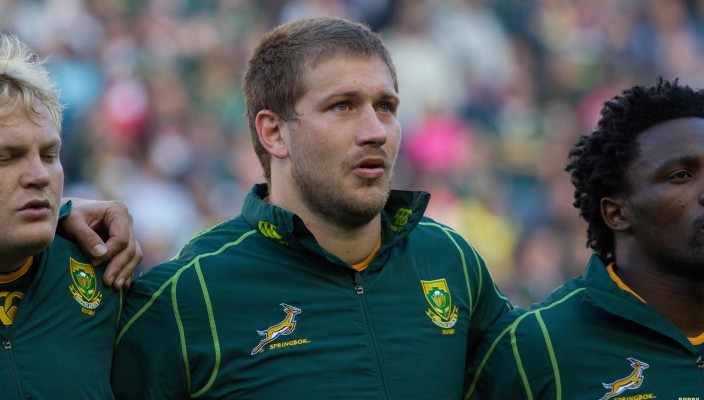 Francois Philippus Lodewyk Steyn (born 14 May 1987) was key member of the South African team that won the 2007 Rugby World Cup. He is renowned for his long distance kicking ability, strong tackling, powerful ball carries and versatility, the list just goes on.

Frans has represented South Africa on 53 occasions scoring 132 points. He holds the record for the youngest Springbok to reach 50 caps and is still the youngest player (20) to win a World Cup.

Steyn has also earned 75 caps for the Sharks, 59 for Racing Merto and 11 for Toshiba Brave Lupus in Japan.

We believe that a fit Frans Steyn would make a huge impact for the Springboks and their World Cup Campaign should he get to represent the Boks there. He has double the number of caps as the three young midfielders have combined and now that Jean de Villiers experience is compromised Frans would be the ideal candidate. One who understands the level of pressure and can step up to any occasion.

Rugby Fifteen was honored to catch up with this rugby legend who is simply to good to be ignored by the Springboks or any team for that matter: 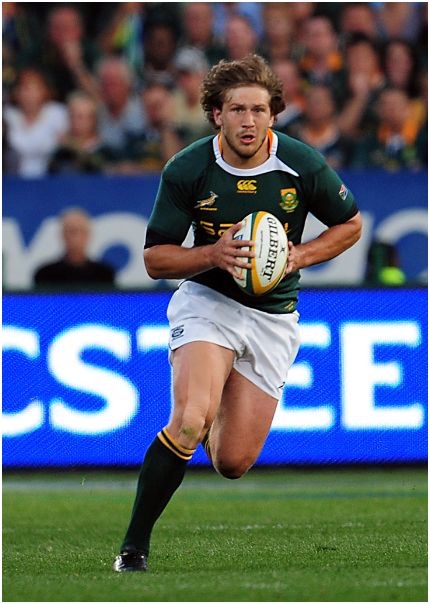 R15: You were left out of the Heyneke Meyer’s 31 man squad mainly due to lack of game time after your injury but its understood that you have been involved in contact for a about month now and that the Japanese coaches are happy with your current fitness levels and form?

FS: I am thank you. I started training at the Sharks after my shoulder operation in May so I have been in good shape ever since. My fitness tests are all good and I would have played last weekend in a match which was cancelled. This coming weekend Toshiba plays against Suntory and I start on centre. I am really excited about it!

FS: I do not know. No player can ever really say. You can be the best player in a test this weekend and the next weekend you have a shocker and people demand that you be axed. The only proof is to go out on the field and measure yourself against the best. I still crave the opportunity.

R15: Heyneke Meyer is keen on experience and has included players who have not had a lot of game time in his squad. Your thoughts on form versus experience.

FS: That’s every coaches challenge, to find the right percentage of players in the team who maintain that balance. In my view it depends a lot on the character of the players in question. Some players are the best because they are in form and because they have confidence. Other players bring an aura to the game and an attitude that supersedes form. It is the coaches right to determine which players tick which boxes.

R15: You have started tests in the 10, 12, 13 and 15 jumpers as well as replacing Ashwin Willemse at 14 against Australia at Newlands which shows incredible versatility. What position do you prefer and why?

FS: I have given up on trying to figure out for myself which my best position is and I am really happy with the outcome. I really do not mind playing in any of those positions although 13 is typically a position that requires a full time specialist.

R15: Successful goal kicking is critical to any teams success especially come play-off time at a Rugby World Cup. Games are won by small margins. What goes through your head when you step up to take a 55m kick that could make or break it for your team?

FS: I make a point of it to think as little as possible. I have a fixed routine which I back and which I know if followed should be successful in 90% of attempts plus. I just concentrate on sticking to that routine.

R15: Heyneke Meyer has always been big on having a balance of experience and youth. You have been there and done it as part of the 2007 Rugby World Cup. What do you believe that you could add to the current squad if you get a call up taking leadership, experience, versatility and form in to account?
FS: It is not a question I can answer except that I have never taken a field in my life without giving it my very all and remembering that it is a team sport. The team comes first and that means that you have to take decisions which will sacrifice your own selfish needs and goals.

R15:  What does it take to win a Rugby World Cup?
FS: A very special squad with the very best players in the world in key positions. Aside from that, you do need luck and a carefully planned strategy providing for all on field scenario’s you can think of in terms of decision taking. 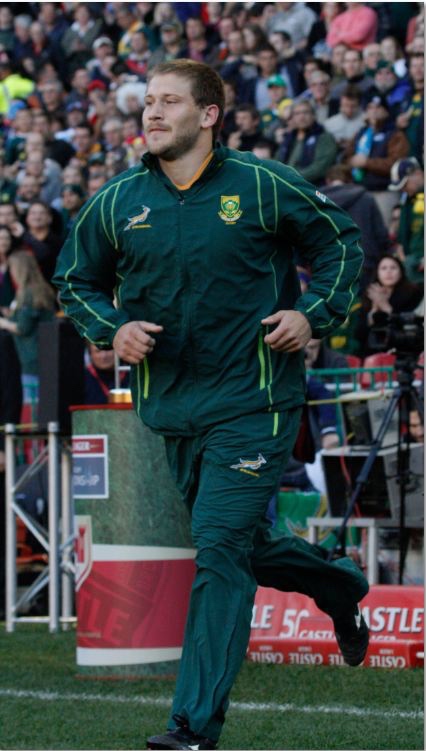 R15: What is your fondest rugby memory in a Springbok jersey?
FS: Winning the Tri Nations in Hamilton in 2009. It was just before I left for France and did not think I would play rugby again in a Springbok jersey so I made a point of soaking in the magnitude of it all and appreciating it. The World Cup win in 2007 was obviously the greatest experience in a springbok jersey but I was so young and inexperienced and naïve that I would be lying if I say it was my fondest memory. I did not appreciate it at the time for what it really was.

9-
R15: At 28 you still have a good few season in you. What are your short and long term goals? Is Top 14, Heineken Cup, Super Rugby, Currie Cup, Springboks or perhaps even RWC2019 on your radar?
FS: I have never been someone who think or plan too far ahead. There are too many uncontrollable factors in rugby. For now my aim is to be the best player I can possibly be for Toshiba and try and win silverware. Later in the year I will decide on the future, God willing.

10-
R15: How would you compare rugby in France to South Africa? We have seen some big name signings for a number of French clubs which will surely elevate the competition and provide top class rugby?
FS: Big names have been in the French Top 14  for many years so I do not think the next group of players who will enter the Top 14 will elevate the Competition. In South Africa, the best rugby competition I was involved in was Super Rugby. You cannot really compare Top 14 rugby in France to Super Rugby. It is like comparing a 100 metres race with a marathon. Both are very demanding and require absolute focus and commitment but they are different beasts. The one is not better than the other. If I could be in a team that won both competitions, I would cherish them equally.

11-
R15: What are your thoughts on where South African rugby is currently in relation to World Rugby?
FS: The one aspect of South African rugby in relation to the rest of the world, is the big number of players that leave our shores to go and play abroad. Whether it is a good or bad thing is something that can be argued both ways. I am very excited to see how things will unfold over the next four years. I believe we will see a next generation of world class players who can follow in the steps of a Beast, Bismarck, John Smit, Jean de Villiers, Percy Montgomery etc.

R15: Who had the biggest influence on your career so far? Who were your favourite players / role models growing up?
FS: It is impossible to single out one person. There are countless friends, family, coaches, trainers, supporters and confidents who influenced my career from a very young age until now. I never had a favourite player when I grew up. After I started playing against players from across the world I became a fan of Johnny Wilkinson for the player he is, the man he is and the work ethic and dignity he radiates. The time I spent in France in particular allowed me to appreciate how special he was and remains.

13-
R15: Although many factors determine the outcome of sport, coaches have a direct influence on players, their attitudes and performance. Who is your favourite coach and why?
FS: I cannot give one name as it will be unfair. Every coach I had has bettered me in some way, shape or form. The best coach is one who is brutally honest with a player and who tells you how it is, whether it is good or bad news. Coaches make or break players. They decide whether players are remembered at all or not and if they are remembered how and what for. If men like Dick Muir and Jake White did not put their own reputation at risk by giving me a chance as a youngster with no experience or senior track record I would not have been a player who could carve a career out of rugby.

14-
R15: What message would you give to young up and coming rugby players?
FS: Forget about the bling, the fame, the ego that comes with it and the love for material things which will definitely tempt you in to parting ways with your principles. Get up every morning and put in a harder honest day’s work than anyone else to be the best player on the field! The legends are those who remained the best on the field until the very last game and not the show ponies off it. 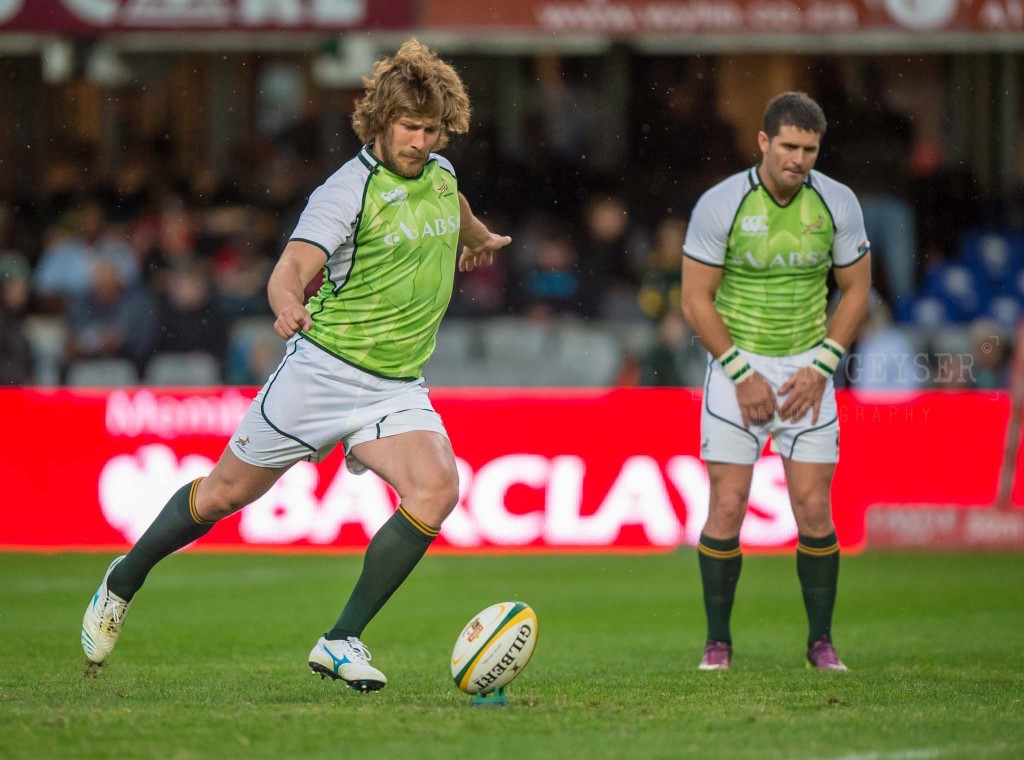