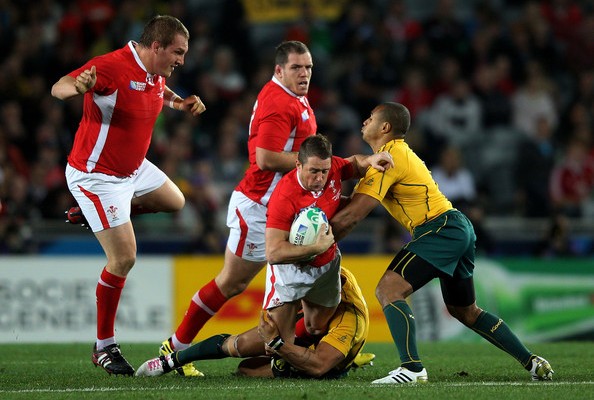 Twenty-one-year-old James O’Connor will start his maiden Test as a fly half after today being named in the number 10 jersey as the Qantas Wallabies combination for Saturday’s James Bevan Trophy Test against Wales in Cardiff was announced.

The selection follows the polished performance from the position given by the new Melbourne Rebels recruit during last weekend’s 60-11 win over the Barbarians in London.

Although he didn’t score a try, O’Connor directed operations skillfully, varying his running and passing game, while also kicking all eight placed goals that he struck as well as a wobbly but effective field goal.

The Wallabies backline starts intact from that match, with inside centre Berrick Barnes having recovered from the blow to his back which forced him from the field at Twickenham.

He returns, with last weekend’s impressive Wallabies’ first-timer Ben Tapuai included on the bench, from where he will get to make his Test debut should he be pressed into action during the game.

Queensland Reds utility back Ben Lucas has also made the bench, as the replacement halfback, and will also be on debut should he be called on to take the field.

There have been 851 players thus far represent Australia in matches that have been accorded Test status by the Australian Rugby Union, the most recent of whom to gain a Test number was Queensland Reds winger (& Wallaby No. 851) Rod Davies, during this season’s one off match against Samoa in July.

This weekend’s game in Cardiff is the 533rd Test match to have been played by a team recognised as representing Australia.

Although 22 of the 26 players in the current touring party featured at the recent Rugby World Cup: Barnes, halfback Will Genia and winger Digby Ioane are the only players who will occupy the same starting backline positions on Saturday as they did during Australia’s 21-18 win over Wales in the Bronze Final at Auckland which closed out that tournament for both sides.

The forward unit boasts a more settled look, with the only change from Eden Park seeing locks Rob Simmons and Nathan Sharpe swap roles. This time Simmons will start, with Sharpe providing reinforcement from the bench.

After scoring two tries during a 30-minute cameo off the bench against the Barbarians, Tour captain James Horwill returns to the starting line-up this weekend, taking over the leader’s armband from last weekend’s successful first-time skipper David Pocock.

Pocock nonetheless looms as an important figure for the Wallabies against an opponent he has enjoyed significant success against in the past. This weekend, he will mark Wales captain Sam Warburton, who missed out on the World Cup contest between the two sides due to suspension.

Qantas Wallabies coach Robbie Deans says his side will have to be “at its very best” to subdue a Welsh outfit that will be buoyed by its Rugby World Cup exploits, while also fuelled by an additional motivation in looking to give long-serving winger Shane Williams a winning farewell as he ends his Test career after the match.

The fleet-footed Williams is already the leading try-scorer for Wales against Australia, scoring his fifth try against the Wallabies during the recent Bronze Final. That score was the 57th(a Welsh record) try that the 34-year-old has gathered from his 86 Tests to date.

“We experienced ourselves how powerful the additional motivation of playing for a mate can be, when ‘Sharpie’ [Wallabies lock Nathan Sharpe] had his 100thTest in Auckland,” Deans says.

“There was no way any of the other players wanted to let him down. I’ve no doubts that the Welsh lads will be feeling just the same this week as we did in Auckland. Emotion plays a powerful role in competitive sport.”

Wales would also see this match as the perfect opportunity to kick on from the team’s World Cup advancement by knocking over an opponent ranked higher in the International Rugby Board standings, Deans noted.

“Warren [Wales coach Warren Gatland] will be looking for his group to push on from the World Cup,” Deans says, “and this match provides him with a perfect opportunity to do just that as a springboard heading into the next Six Nations.”

After winning just once from four visits to Cardiff between 2005 and 2008, Australia is on Saturday bidding for its third successive victory at the Millennium Stadium, and its fourth win in-a-row against Wales overall.

Should the Wallabies succeed, that would give the current side outright ownership of the second best winning sequence ever achieved by Australia against Wales, trailed only by the nine wins that were gathered between 1991 and 2003.

The Test will be broadcast live in Australia on both Fox Sports and free-to-air on SBS.

The competitive rivalry between the two teams, as was showcased at the Rugby World Cup, will after Saturday resume in Australia next year, with Wales due Down Under for three Test matches through June, playing in Brisbane, Melbourne and in a return to Tests at the Sydney Football Stadium.

21-year-old James O’Connor will feature in his 37thTest on Saturday, one scoring play away from becoming just the eighth Wallaby to surpass 200 Test points. Fresh from a Rugby World Cup campaign where he finished as the tournament’s second highest point-scorer (behind South Africa’s Morne Steyn) with 52, O’Connor begins this weekend with 199 Test points to his name.