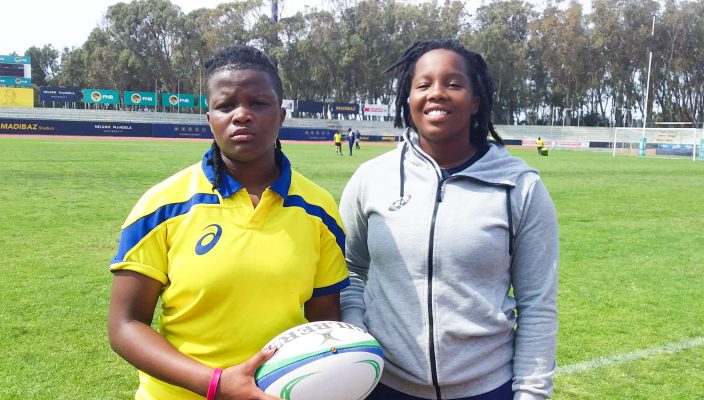 Twins Chuma and Chumisa Qawe do not only share a special bond off the rugby field, they have also become inseparable on the field, where they have made a good impact as a duo in a series of big matches this year and with the national women’s squad currently in Port Elizabeth.

In the last few months, the Qawe twins appeared next to one another – Chuma at fullback and Chumisa at centre – in the in SA Women’s U20 team’s Internationals against Zimbabwe, the SA Rugby Women’s Interprovincial final – where their team, Border, went down 38-32 against champions, Western Province – and the SA Select Women’s game against the Spain Invitational XV in Despatch.

The 19-year-old duo will know on Friday if they will make their Test debuts against Spain on Saturday at the WJ de Wet Stadium in Despatch. But regardless of whether they will achieve this is not, this tour will remain a special memory as they continue to make their mark on the rugby field.

“It is very exciting to share this experience with my sister,” said Chuma.

“We are among some of the younger players in the national women’s squad, so although I was thrilled about being called up for the tour, I was also quite nervous at first, so it was good to have a familiar face in the squad.

“We are very supportive of one another in general, and it is great to have my sister around to lift my spirits when I make a mistake on the field or if I get pre-match jitters.”

Chumisa echoed her sister’s sentiments, and said: “It is really amazing to play in the same team as my sister, and the fact that I took up rugby because of her makes this even more special.”

Chuma admitted that it took some convincing to get Chumisa to take up rugby and to return to the field after her first injury.

“Cricket was my sport of choice at primary school, but one of my primary school teachers suggested that I take up rugby, so I did, although I had to play with the boys, and I have loved it since,” said Chuma.

“It was different for Chumisa because she played netball and only used to watch me play rugby. She eventually tried it out, but I remember having to convince her to keep on playing after she was put off by her first injury in a club game a few years ago.

“We both went on to play for Border after that, and now we have the opportunity to share this fantastic opportunity to be on tour with the national women’s team.”

The twins relished their first taste of international rugby for the SA Select Women’s team in their friendly against the Spain Invitational XV and said it fueled their determination to represent the Springbok Women.

“It is amazing to be part of this team and to learn from players who have played the game at the highest level,” said Chumisa.

“The players and coaches have really encouraged us on the field, and it is great to learn in an environment like this.”

Chuma looked back at the Spain Invitational XV match with fond memories, despite the team going down 17-5, and said: “It is great to be part of this squad and to have such inspirational players and coaches guiding us.

“I really enjoyed the experience of facing the Spain Invitational XV, and it inspired me to keep learning as much as possible and to do the best I can so that I can represent the Springbok Women and hopefully become a regular member of the team one day.”

The Springbok Women’s team for Saturday’s Test will be announced on Friday, and all the action will be streamed live on www.springboks.rugby at 15h00.