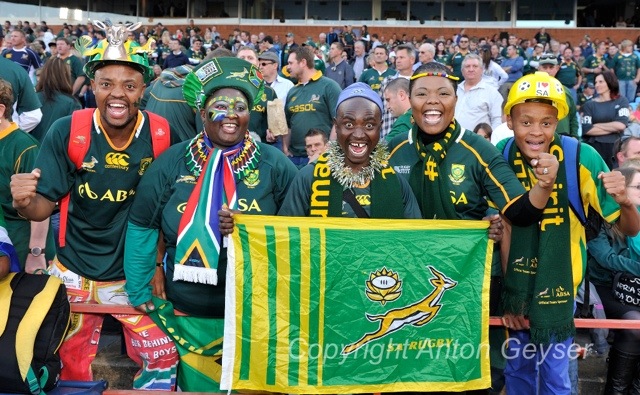 The Springbok Sevens team were edged out of the Rugby World Cup Sevens in Moscow’s Luzhniki Stadium on Sunday with a heart-breaking 12-10 defeat to Fiji.

A conversion attempt from Cecil Afrika narrowly missed the upright after Sibusiso Sithole scored with less than a minute of play to go and from the resulting kick-off Fiji controlled the ball and kicked it into touch for their win.

South Africa was also knocked out at the quarterfinals of the 2005 Hong Kong and 2009 Dubai World Cup Sevens tournaments.

The Springbok Sevens team started well and were on the scoreboard first after Cheslin Kolbe created some space to allow Ryno Benjamin to dot down in the corner. Kolbe’s conversion was unsuccessful.

Two tries by Fiji in quick succession gave them a 12-5 lead at the break.

South Africa came back well in the second half and when Sithole scored, extra time looked a certainty. But it was not to be, much to the agony of the squad and coach Paul Treu, who lost captain Kyle Brown due to suspension overnight.

Brown was found guilty of “recklessly making contact with an opponent’s eye” and suspended for two matches.

“We really wanted to win this for South Africa and for Madiba, so we are gutted,” Treu said.

“There were enough opportunities for us to beat Fiji here today, but for once our play at the break down let us down and they could extract penalties from our players becoming isolated. I am still very proud on the effort of the players. They showed their capabilities on the first two days, but we just did not complete the job today. We have no one but ourselves to blame for that.”

The squad returns to South Africa on Tuesday.

•The Springbok Women Sevens team also ended their World Cup campaign in disappointing fashion when they were beaten 22-5 by Fiji in the Bowl quarterfinals.

Things were tight just after the break, when a well-worked try by Pumeza Gadu cut the 12-0 Fiji halftime lead to one score only, but the Pacific Islanders responded by scoring two more tries to secure the win.

“We have disappointed ourselves and no doubt, our supporters too,” said Springbok Women Sevens coach Denver Wannies afterwards.

“This was not the way we expected the tournament to go for us. We did not play to our potential.”

The team will leave Moscow for South Africa on Monday.