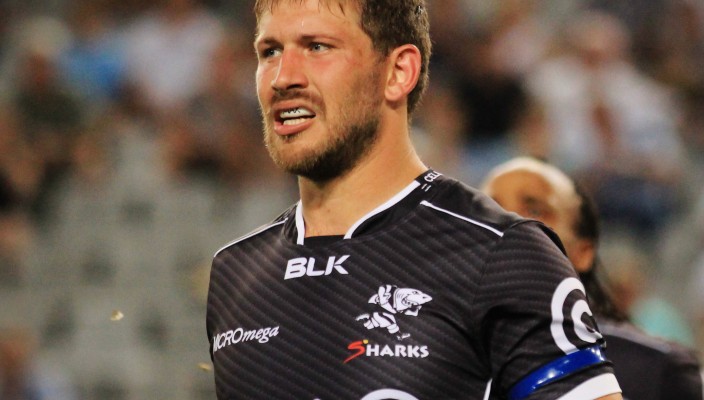 Hearing Details: 23 March 2015 @ 11am SAST, 8pm AEDT, 10pm NZDT via videoconference
Judicial Hearing Chairman: Jannie Lubbe SC
Player: Francois Steyn
Team: Sharks
Position: Centre
Date of Incident: 21 March 2015
Nature of Offence: 10.4 (j) Lifting a player from the ground and dropping or driving that player into the ground whilst that player’s feet are still off the ground such that the player’s head and/or upper body come into contact with the ground is dangerous play.
Elapsed time in match when offence occurred: 28th minute

A SANZAR Judicial Hearing has found Francois Steyn of the Sharks not guilty of contravening Law 10.4 (j) Lifting Tackling, after he was sent off in a Super Rugby match at the weekend.

The incident occurred in the 28th minute of the match between the Sharks and Chiefs at Growthpoint KINGS PARK in Durban on 21 March 2015.

The SANZAR Judicial Hearing was heard by Jannie Lubbe SC via video conference at 8pm AEDT, 10pm NZDT, 11am SAST on 23 March 2015. De Wet Barry was the former professional player who attended as a Judicial Technical Adviser.

In his finding, Lubbe ruled the following:

“After careful consideration of video evidence, including additional video evidence and still frames submitted by the legal representative of Francois Steyn, Gerrie Swart, as well as the oral explanation of Steyn, it was concluded that Steyn did not act in breach of Law 10.4 (j). It was also found that two other Sharks players were involved in the tackle and that one of the players, Cobus Reinach, played a significant part in what appeared to be a serious and dangerous tackle.

“A detailed analysis of the execution of the tackle by Steyn clearly showed that he executed a perfectly legitimate tackle on Aaron Cruden, but that the intervention of his teammates applying additional and external forces to the dynamic tackle situation resulted in what the referee deemed to be a breach of Law 10.4 (j).

“This decision is not meant to be critical of the match officials who had to take and make their decision on the field of play without the benefit I had of additional video material and submissions by legal counsel.

“As a result of this finding, the red card will be expunged from the player’s record.”