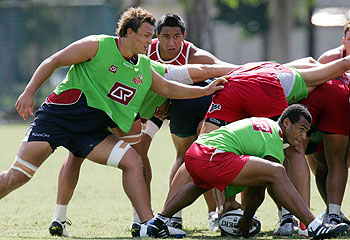 Teenage backrower Jake Schatz will make his Super 14 debut for the QR Reds at Suncorp Stadium on Friday night against one of the toughest teams in the competition, New Zealand’s Crusaders.

The 19-year old QAS Reds Academy forward, who captained his club side Sunnybank during the 2009 Premier Rugby season, will win his first state cap playing at blindside flanker.

A head knock to experienced lock Van Humphries meant a return to the scrum engine room by Reds captain James Horwill, who played flanker against the Waratahs last weekend, while hooker Sean Hardman has succumbed to an ankle injury, giving Saia Faingaa his first opportunity to start a match in the Reds No 2 jersey.

McKenzie has also made four changes to his bench, all in the forwards, while back reserves Richard Kingi, Tim Walsh and Will Chambers all retained their spots.