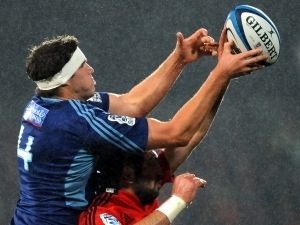 Retallick out for six months with knee injury

The Blues have been dealt a significant blow before the season has begun, with experienced lock Culum Retallick ruled out of action for six months.

28-year-old Retallick ruptured the anterior cruciate ligament (ACL) in his right knee during a training drill on Tuesday.

The 1.98 metre lock had a scan on Thursday and after consulting with a specialist yesterday, he is scheduled to have surgery in the New Year after the swelling in his knee has subsided.

He is expected to be out of action for around six months.

“I was incredibly motivated for a big year with the Blues in 2014 and had been enjoying a tough pre-season with the guys, so it’s a pretty cruel blow to have this happen before the season has even started. Hopefully I can still play a part with the team towards the latter end of the season.”

“There’s no denying he is a big loss for us,” Kirwan said.

“He’s a very difficult player to replace. He had a great season for us in 2013, he’s experienced, a good lineout technician and is a very big part of this team so it’s a big blow.

“In consultation with the surgeon, we’re going to evaluate the damage to his knee and the big decision for us is whether we can get him back in time for the end of the season or whether we’re going to need to replace him.”

A decision on whether or not Retallick will be replaced will be made in the New Year.