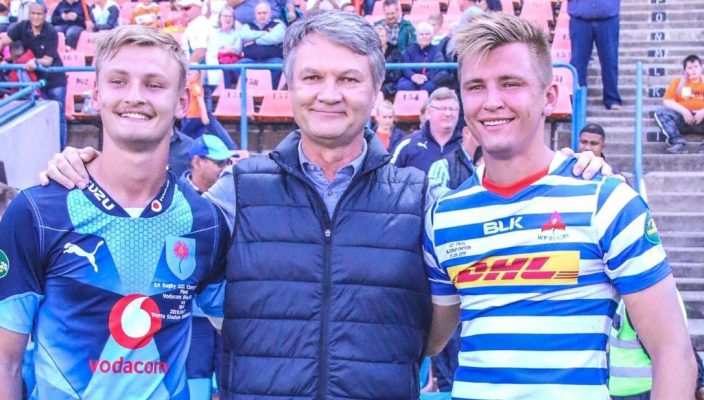 Reuniting another set of Kriel brothers

May 29 • General News, National, South Africa • 418 Views • No Comments on Reuniting another set of Kriel brothers

The Vodacom Bulls will be reuniting another set of Kriel brothers at Loftus, as we confirm the signing of exciting fullback David Kriel who joins the #BullsFamily from the DHL Stormers. He will link up with his younger brother Richard and the rest of the team on 1 November as Director of Rugby, Jake White, continues to re-engineer the ‘Blou-Masjien’.

The 21-year-old weighs in at 94kgs and stands at a whopping 1.94m. He is an ominous threat with ball in hand while his height becomes an obvious advantage when contesting the high ball. As with all the other Kriels linked to the Bulls over the last few years, his younger brother and the more famous twins Jesse and Dan, he is a hard-running physical back with an immense work rate.

The #BullsFamily would have seen glimpses of the former Grey College scholar’s potential when he squared off against the Vodacom Blue Bulls U21 in last year’s SA Rugby U21 Championship final and although he had to settle for second place then, he was without a doubt a standout performer on the day.

Director of Rugby, Jake White, expressed his delight in Kriel’s signing and expects big things from him when rugby resumes.

“David is a solid choice at fullback or centre so to have his signature not only bodes well for the Vodacom Bulls but is also a sign that youngsters can see the value in joining us. I look forward to seeing him grow at the #BullsFamily as he is destined for bigger things in his young career,” said White.

Younger brother Richard, is also looking forward to sharing the same colours, and is obviously excited as he joked about their reunion, “This is great news, as we now get to put an end to the age old family debate about who’s our mum’s favourite,” he laughed, “David is an amazing rugby player, but more importantly an overall lekker guy who will slot into our #BullsFamily culture perfectly. He has had a huge impact on me, and I’m really glad we get to take these next steps together.”