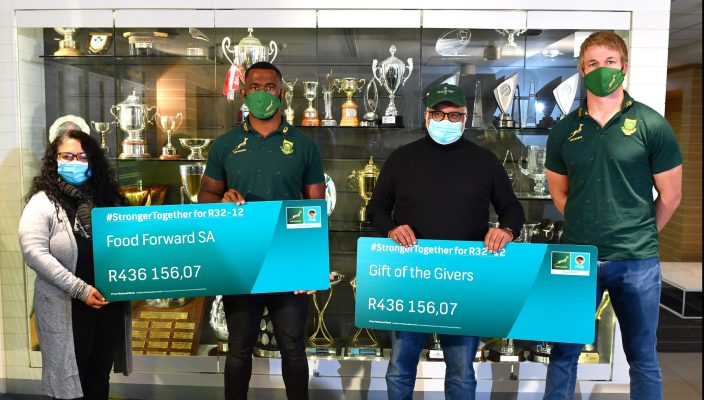 Springbok captain Siya Kolisi and Rassie Erasmus, SA Rugby’s director of rugby, thanked South Africans for answering the Springboks’ call to help raise funds to help with hunger alleviation amid the COVID-19 pandemic, as the names of the 44 winners were announced on a live Facebook broadcast on Wednesday.

The Springboks’ #StrongerTogether for R32-12 fundraising campaign finished on a high note last Friday, with a total of 31 928 raffle tickets sold, while donations of close to R80,000 were received for a total raised of just over R1.1m. The two charities identified as part of the project – Gift of the Givers and Food Forward SA – received over R430,000 each (after VAT and sales costs were deducted).

There was also a Schools Challenge, driven by Boys for Action, and on Wednesday, the school that sold the most tickets will be announced. Their prize – a “visit” by the Webb Ellis Cup – was won by St John’s College in Johannesburg. For a full list of prize winners, click here.

“We asked South Africans to answer the call and to help the Springboks to raise funds for poverty relief and I am immensely proud of what we have achieved during this campaign,” said Erasmus, who coached the Springboks to 2019 Rugby World success in Japan.

“The players didn’t hesitate when I asked them to contribute some of their most prized personal RWC items, and a number of them took part in events to help raise awareness for the project. I want to thank them, as well as their fellow South Africans for their generosity.

“This unique campaign works closely with Food Forward SA and Gift of the Givers, both of whom are making a huge difference in the lives of ordinary South Africans all over the country, with a helping hand where possible.”

Kolisi said that through the distribution of the relief funds, the Springboks and people who contributed to the fund will ensure that less people will go to sleep on an empty stomach.

“The social economic impact caused by the pandemic has been devastating in some of our communities, with many people struggling for work and food,” explained Kolisi.

“Last year we asked our fellow South Africans to support us during the RWC campaign and they did a magnificent job. So when the opportunity came for the Springboks to be involved and to make a difference, we did so without hesitation and because it’s the right thing to do.

“The players all jumped onboard and donated personal items used during the RWC, which is really something special. We want to thank those who have contributed so generously and we assure you each donation will make a difference in someone’s life.”

During the six-week campaign Kolisi and some of his RWC winning Springbok squad members visited the headquarters of Food Forward SA in Epping to help pack food parcels for distribution to needy communities, and they gave learners of Peak View High School in Athlone a surprise visit to handover food hampers and school stationary.

However,it was not only the Springboks squad who rolled up their sleeves during that time – they were also accompanied by Blitzboks and Imbokodo captains, Siviwe Soyizwapi and Zintle Mpupha, and SA Rugby staff members.