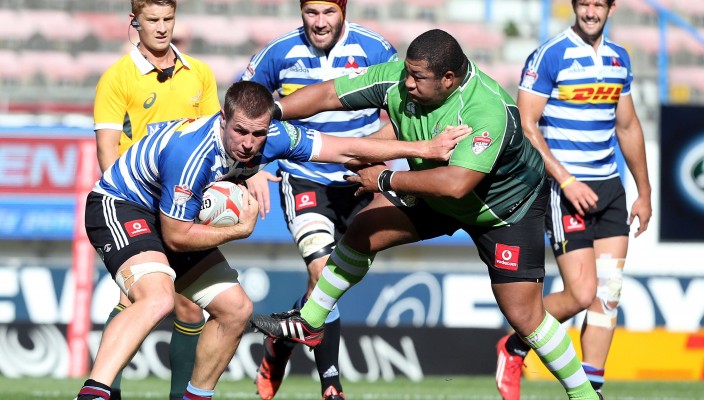 May 12 • General News, Vodacom Cup • 3033 Views • No Comments on Revenge on the agenda for the South Section – Vodacom Cup Quarter-finals Preview

The four South Section teams in the Vodacom Cup quarter-finals will be out for revenge after none of them progressed past the last eight in 2014.

Teams from the north have dominated proceedings in the Vodacom Cup, which kicked off in 1998.

Only three times out of 17 campaigns have non-Northern teams won the competition – that was in 2000 (Toyota Free State XV), 2011 (Pampas XV) and 2012 (DHL Western Province). GWK Griquas, runners-up in the South Section this year, played in the North Section previously.

The defending champions will be the first team in action in the quarter-finals this year when the Steval Pumas travel to GWK Park in Kimberley on Friday evening to play GWK Griquas (kick-off at 19h00).

Peter Engledow’s team from the Northern Cape lost only one of their pool matches this year, which gives them an impressive winning record of 15 out of their last 17 Vodacom Cup matches.

The Steval Pumas, coached by former Blitzbok speedster MJ Mentz, have been a strong contender in recent years – they were runners up in 2013, lost in the semi-final last year and won five of their seven pool matches this year.

The Vodacom Blue Bulls host the Toyota Free State XV in the second quarter-final at Loftus Versfeld on Friday evening (kick-off at 19h10 – live on Supersport 1). It’s a replay of last year’s quarter-final, won by the men from Pretoria by a single point.

The Nollis Marais-coached Vodacom Blue Bulls scored 40 tries in their seven pool matches this season, which is the most by any team. Their opponents from Bloemfontein, coached by Rory Duncan, were the top try-scoring side in the South Section with 28.

The SWD Eagles will have a massive mountain to climb when they travel to Emirates Airline Park to take on the top side from the North Section, the Xerox Golden Lions (kick-off at 14h10, live on Supersport 1).

The men from George, coached by former Springbok fullback Bevin Fortuin, have notched up a few impressive wins this season, but facing a mean-looking Xerox Golden Lions side at altitude is another proposition.

Russell Winter, coach of the Johannesburg-based side, would have faced Fortuin many times in his provincial career and will know it would be a massive mistake to underestimate the Eagles, but the Xerox Golden Lions would still be favourites to qualify for their third successive semi-final.

The last quarter-final is at City Park in Athlone, where John Dobson’s South Section champions, DHL Western Province, will host the Leopards XV.

The men from Potchefstroom, coached by Chaka Willemse, needed a bonus-point victory in their final pool match to make it into the top eight, which they duly did in Windhoek last weekend, but a visit to the Cape is a different proposition.

Performance in 2014: 5th in North Section

Live on SuperSport1 and CSN

Live on SuperSport1 and CSN