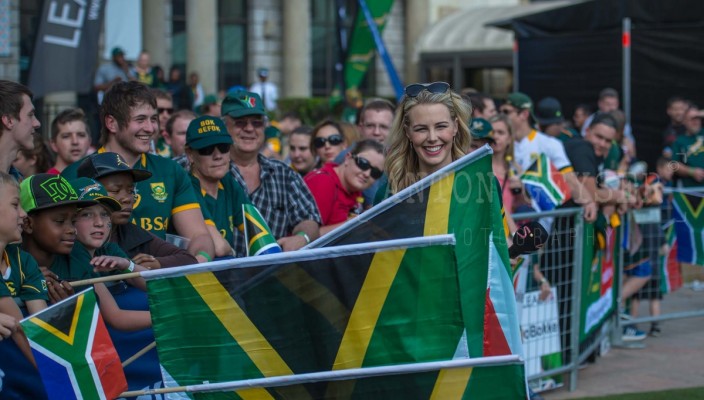 The Springboks were given a vibrant and rousing reception at their official Rugby World Cup Welcoming Ceremony, held at the iconic Winter Gardens in Eastbourne on Sunday afternoon.

Hundreds of rugby fans lined the street and packed the venue as the Boks, led out by coach Heyneke Meyer, entered the theatre to the sounds of well-known British hard rock band Led Zeppelin.

All the players received their Rugby World Cup caps and participation medals, while the team management were also awarded medals.

The Springboks and gathered crowd were addressed by Mr Oregan Hoskins, President of the South African Rugby Union and Deputy President of World Rugby, Mr Ian Richie, CEO of the Rugby Football Union and the Worshipful the Mayor of Eastbourne, Councillor Janet Coles.

Meyer and Springbok captain Jean de Villiers spoke on behalf of the team and thanked all the Springboks’ bases for the duration of the tournament for their efforts, as well as the throngs of fans who made the team feel welcome in England.

De Villiers was responsible for a moment of light relief when he took a selfie from the stage (visit @Springboks on Twitter to see the image), while the Eastbourne College Choir and the Brass Fanfare from the London Art Orchestra provided entertainment.

“Yet again we are completely humbled by the amazing support we’ve received,” said Meyer.

“We’ve been in England for a little over 24 hours now and it’s been nothing but amazing. The organisers and everyone else involved in this Rugby World Cup have done a great job so far and it really feels like the tournament has now started.

“But it’s the support from locals and our Springbok fans here in England that has really made a mark on this team, and we are truly grateful.”

The Springboks will have their first training session on English soil on Monday afternoon at Eastbourne College. The team to face Japan at the Brighton Community Stadium will be named on Wednesday.