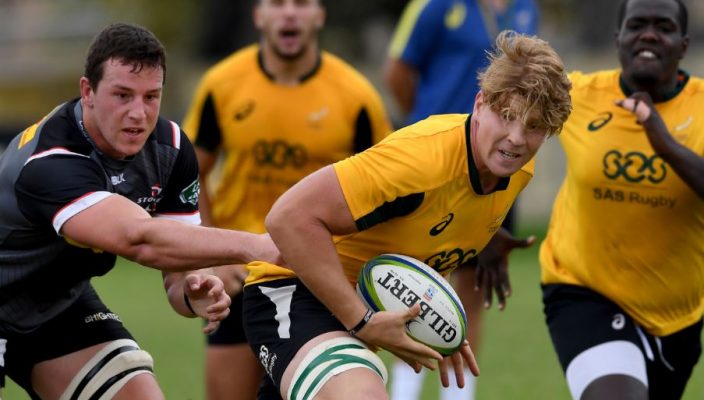 Junior Springbok coach Chean Roux would have been excused if he experienced some form of déjà vu on Tuesday when the SA Rugby Academy squad took on his old team, the DHL Stormers, in a friendly hit-out that would have stood the youngsters in good stead as they stepped up their preparations for the rest of the season.

Roux, who is also at the helm of the SA Rugby Academy, represented the Capetonians in Vodacom Super Rugby during his playing days. He was very grateful to his former team-mate and current DHL Stormers head coach Robbie Fleck, for agreeing to the “friendly match” in Bellville.

The SA Rugby Academy squad gathered in Stellenbosch last week Wednesday for the second of three training camps, and the session against the DHL Stormers marked their second “live” hit-out against opposition teams, in line with the Academy’s objective to develop top-class players.

The teams took to the field at DHL Western Province’s High Performance Centre in Bellville, where Roux had the opportunity to guide his team hands-on during a series of short breaks.

The special occasion of facing some of their DHL Stormers and Springbok heroes aside, the Academy squad players were also treated to a few inspirational words by Springbok captain Siya Kolisi in their team huddle.

“I am very pleased and grateful for the DHL Stormers for allowing us to train against them, especially with a big Vodacom Super Rugby game (against the Jaguares) coming up,” said Roux.

“It was great for the players to see what a professional set-up like the DHL Stormers is all about and what they are capable of.”

Of the rare opportunity for the players to go up against the likes of Kolisi, Eben Etzebeth and a number of other Springboks, Roux said: “It was great for the guys, and so was the chance to chat to the DHL Stormers players after the session. We are very grateful, and hopefully the players learned from it.”

The second SA Rugby Academy training camp will conclude at the end of next week, with the third camp – which will include international friendlies against Georgia, Argentina and Namibia – set to kick off on Wednesday, 27 March.

The international friendlies will also serve as platform to prepare the players who make it into Roux’s travelling squad for the World Rugby U20 Championship in Argentina in June for the international showpiece.

“We are getting there slowly but surely, however, there is still a lot of hard work to do,” Roux said of the progress the squad has been making since the SA Rugby Academy started in February.

“We still have another week-and-a-half to go at this camp, and then we will assess where we are terms of players. We will get everything in place for our first three games after that. The most important aspect for now is to continue the hard work on the field.”