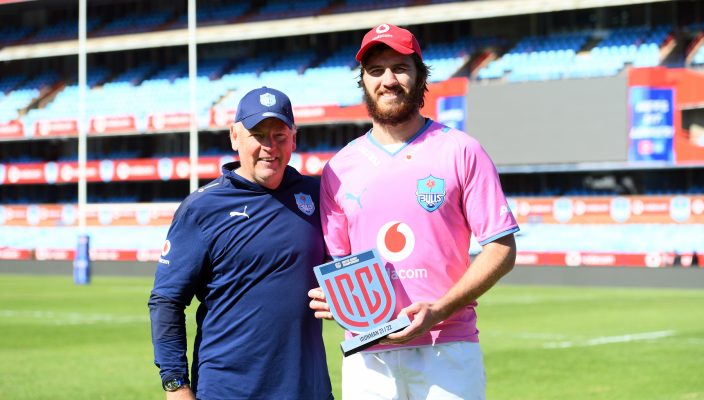 The Vodacom Bulls would like to congratulate lock, Ruan Nortje, who was on Monday announced as the winner of the Vodacom United Rugby Championship’s Ironman Award for the 2021/22 season.

The award is given to the player who has played the most minutes in the Vodacom URC until Round 18 of the competition.

The 23-year-old Vodacom Bulls second-rower managed to accumulate an incredible 1 394 minutes on the field for the Tshwane-based side, and was one of only 14 players to feature in all 18 matches for their teams.

“I am humbled and honoured to receive the Vodacom United Rugby Championship Ironman Award for the 2021/22 season. To receive this recognition in a world-class competition with some of the most respected players is definitely something that will remain a highlight in my playing career for many years to come,” said Nortje.

“I am grateful to the Vodacom Bulls, our director of rugby, Jake White, the coaching staff, my teammates and the supporters of the franchise for the faith and support they have all given and had in me. To be able to put on the blue jersey and play for the badge in such a premier championship is something I do not take lightly. I look forward to many more memories and matches in the Vodacom URC.”

The Vodacom Bulls expressed their delight following the announcement of the award.

“We are proud of the contribution that Ruan has made this season. His dedication and hard work has been phenomenal throughout our campaign,” said Vodacom Bulls director of rugby, Jake White.

“Ruan has been an integral part of our squad and he continues to grow immensely as a player and individual. I have no doubt that we will see more of him playing at the highest level for many more years to come. All of us at the Vodacom Bulls congratulate him on winning the Ironman Award. It is a well-deserved accolade for him.”

Nortje scored one try as the Vodacom Bulls achieved a fourth-place finish in the regular season and was second to Glasgow Warriors’ Richie Gray for line-out steals (9).

The Vodacom Bulls dominated the top five when it came to minutes played, with Marcell Coetzee (1 296) third and Madosh Tambwe (1 295) fourth.