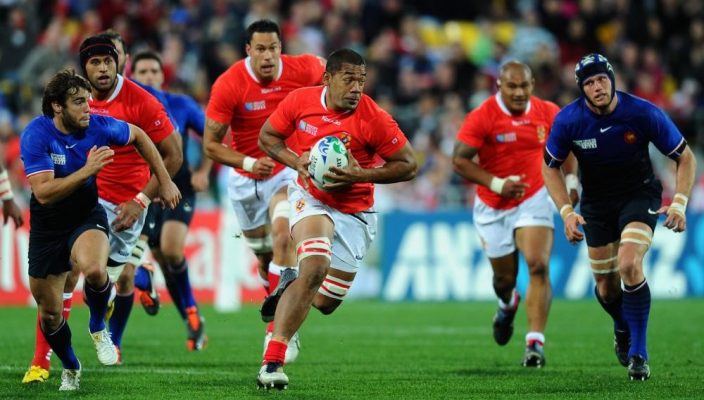 Following on from the classic RWC 1991 quarter-final between England and France which was live-streamed on the official RWC Facebook page last Saturday and gathered 300,000 views, today’s offering is Tonga’s shock victory over France at Rugby World Cup 2011.

The full match will be shown today for free at 19:00 GMT on Rugby World Cup Facebook page and World Rugby Youtube channel.

Expert commentary, live blogging and thoughts from those who were there, will generate a truly immersive and engaging experience for fans around the world.

Fans and players are being asked to select their favourite matches, with the most popular joining the schedule of classics that World Rugby will stream. The already selected classic matches for this weekend include:

A sea of red descended on Wellington as Tonga prepared to take on France in their final Pool A match with a place in the quarter-finals at stake.

Supported by a mass following, Tonga needed to win by a big margin and take a bonus point from the game while denying France one in order to progress.

They failed in that respect but at the final whistle the ‘Ikale Tahi celebrated a 19-14 win as if they’d won the Rugby World Cup.

A try by winger Sukanaivalu Hufanga and 14 points from the boot of fly-half Kurt Morath did the damage on a never-to-be-forgotten occasion, but in truth, France escaped lightly and had Tonga enjoyed the run of the ball at certain critical moments, it might have been the Islanders and not the flustered French who made the quarter-finals.

That France managed to compose themselves sufficiently to reach the RWC 2011 final – and then nearly win it – speaks volumes of Tonga’s achievement that evening, and the team deserved all the laurels that were thrown at them when they were welcomed home as heroes.

Tonga’s Siale Piutau said: “Of course we set out with the intention of going for the five points. But that didn’t happen for us (they scored only one try, not four) and it just became about winning.

“Some of us went straight back to Tonga afterwards and the crowds were lining the highway from the airport. We got rushed into the welcoming ceremony and up on to a stage.

“You can imagine what it was like seeing everyone there cheering us.”

France went on to beat England and then 14-man Wales before falling just short against hosts New Zealand in the final.

“We didn’t need to do a great deal to qualify for the quarters other than avoid losing by four or five tries. I think the physical approach the Tongans took to the game shocked a few of our players who eased off because they didn’t want to get injured for what turned out to be the game against England,” recalled Les Bleus defence coach Dave Ellis.

“I had a word with the players after the Tonga game, and pointed out to them that there was no better team than England for France to play to go from the basement to the penthouse.”

France gained revenge for the setback at last year’s tournament when they defeated a Tonga team captained by Piutau, 23-21.