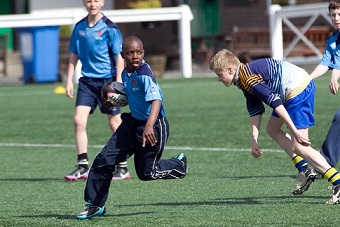 RUGBY WORLD CUP LEGACY CONTINUES TO INSPIRE ONE YEAR ON

One year on from Rugby World Cup 2015, the most successful World Cup ever, a real and lasting legacy for the game continues to inspire the nation, growing participation and improving the rugby environment at a grassroots level.

Steve Grainger, RFU Rugby Development Director, said “We planned meticulously prior to Rugby World Cup launching our Lead Up and Legacy Strategy in October 2012. The RFU invested £25 million, as well as time and resources to ensure the tournament positively impacted the game at a grassroots level.

“Our preparation paid off as we have seen rugby grow considerably across the country with a rise in participation, improved facilities and greater support across all areas of the game.”

Ian Ritchie, RFU Chief Executive Officer, adds “One year on from Rugby World Cup, we have seen the success of the tournament continuing to benefit players, clubs, schools and universities across the country.  We have seen more rugby playing schools, coaches, referees, volunteers, and improved facilities in grassroots rugby clubs. Using the tournament as inspiration, rugby has been introduced to new areas, gaining new fans and many more teams playing and we are committed to ensuring this legacy built lives long into the future.”

“We have already achieved some of our targets but we have even greater ambitions which we hope to accomplish over the coming years in order to ensure the game continues to prosper.”

Prior to Rugby World Cup the RFU identified seven priority areas for financial support, all aimed at inspiring new people to get involved in rugby, those who had left to return, and everyone involved to enjoy the best possible experience of the sport. The areas cover;

One of the main successes of the legacy has been a rise in participation across all age ages and abilities. The RFU’s CBRE All Schools programme, now including 500 hundred state secondary schools, has exposed rugby to 340,000 young people who had previously not had the opportunity to play. The programme will continue to expand with 250 more CBRE All Schools in place by Rugby World Cup 2019.

Focusing on attracting a range of ages and abilities to the game, the RFU’s legacy also targets women and girls, O2 Touch and returning players.

The RFU’s target is to get 25,000 women and girls playing contact rugby by 2017 and is on track to achieve this. The RFU’s nationwide ‘Pitch up and Play’ rugby taster sessions have helped attract those new to rugby, with specifically tailored session to introduce them to the basics of the game within light-hearted, fun-packed and commitment free sessions.

O2 Touch has grown 34% since Rugby World Cup 2015 with an increase of 5,774 players and 51 new O2 Touch centres established, bringing the total number of centres to 321 nationwide. Already surpassing its aim to introduce 15,000 registered players to the game by summer 2017, there are now 17,500 registered O2 Touch players.

Ensuring players brought into the game remain in the game is a core focus for the RFU. Launched in 2015, the RFU Return to Rugby programme was set up to encourage players who have not played for some time, to try club rugby. Aimed at 18-30 year old, targeted sessions were rolled out across 50 clubs in 2015 and received 2,500 player sign ups. Now in its second year the programme has expanded to 50 additional clubs due to demand, with the ambition to double the amount of sign ups by the end of the 16/17 season. This season, 190 new male adult teams will play 15-a-side rugby.

Alongside growing participation, the RFU’s legacy plan is committed to investing and supporting the facilitators of the game, ensuring there are enough qualified coaches and referees to maintain the game and ensure quality and consistency across the nation.

The Rugby World Cup 2015 legacy has funded the training of 6,352 newly qualified coaches of 15-a-side rugby 5,000 newly qualified 15-a-side referees and 4,388 newly qualified children’s rugby referees, ensuring the growth of participation can be managed across all levels of the game. The RFU’s Unity Project, in partnership with World Rugby, Rugby Europe and UK Sport, has also seen over 500 coaches and 200 referees trained in its efforts to develop grassroots rugby across 17 European nations.

Volunteers are the heartbeat of the game and the RFU has maintained close links with the 6,000-strong members of The Pack who helped deliver the tournament to ensure they had the opportunity to continue their volunteering within their local clubs. 12% of The Pack who were new to rugby have since gone on to volunteer at their local clubs, channelling their experience gained into the grassroots game.

The RFU also supports around 1,000 Young Rugby Ambassadors aged between 14 and 24 and 15 Spirit of Rugby projects, enabling young people to gain experience, skills and help make a difference through growing participation across their communities.

Club facilities across the country have also been improved as a direct result of the tournament, with more than £10m invested with a total project value of £47m in over 550 clubs across the country. The investment has enabled clubs to improve their playing surfaces, artificial pitches, floodlights, changing facilities and social spaces.

Work has also begun on the RFU’s first Artificial Grass Pitches (AGPs) in Weston Super Mare, Preston and Aylesbury, with additional pitches, including one in the North East, set to be fully operational by the end of the season.

The three pitches are part of the RFU’s Rugby World Cup 2015 legacy to deliver over £50 million investment over four years into the development of 100 AGPs across England. More than 200 clubs have also received grants totalling £2.36m to help them transform their clubhouses and social areas.