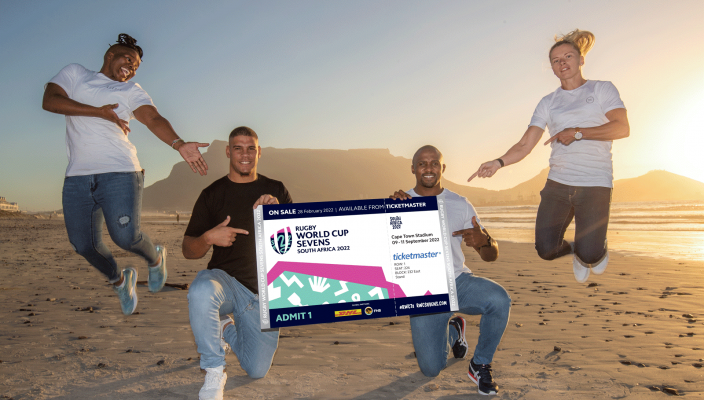 World Rugby has announced the start of the countdown to tickets going on sale for Rugby World Cup Sevens 2022 – to be hosted in Cape Town in September.

Ticket sales will open in two weeks’ time – on Monday 28 February 2022 – for the three-day spectacular which will see the eyes of the global rugby family turned on South Africa as the best players in the world from 40 teams battle for the tile of men’s and women’s world champions.

Organisers are planning for a packed stadium with more teams, more action and more at stake than ever before for a Cape Town event.

“The global vaccine roll-out has allowed the return of capacity crowds around the world and we’re expecting that experience to return to South Africa by the time of the Rugby World Cup,” said Jurie Roux, CEO of SA Rugby.

“The opportunity of seeing the best rugby teams on the planet vying for the title of world champions hasn’t been experienced in South Africa since 1995 which will make this a very special occasion.

“World Cups are unlike any other rugby tournament; for its duration the eyes of the rugby world will be on South Africa, as all roads lead to Cape Town.

“It’ll be bigger, bolder and brighter than anything we have put on before and climax with the lifting of the Melrose Cup and the Women’s Rugby World Cup Sevens trophy on a do-or-die final day.

“This will be a premium experience at a premium event, clearly distinguishable from a World Series tournament, and I am sure the local and global audience will be keen to show their support.”

The event will be the first return of Sevens to Cape Town in what will be close to three years. The 2020 and 2021 Cape Town Sevens events both fell victim to the impact of the pandemic meaning the Rugby World Cup Sevens will be the first chance for fans to enjoy the unique vibe.

World Rugby Chairman Sir Bill Beaumont said: “The announcement of the ticket sales dates is a major milestone as momentum builds on the road to what promises to be a fantastic Rugby World Cup Sevens in a hugely popular destination for sevens.

“Cape Town has a strong track record of hosting excellent sevens competitions as part of the HSBC World Rugby Sevens Series and fans can look forward to a feast of entertainment over three action-packed days, while the teams will be looking forward to playing in front of a passionate and knowledgeable crowd.

“Following in the footsteps of rugby sevens highly impactful second appearance at the Olympic Games in Tokyo, the RWC7s in Cape Town will provide a perfect platform for the best players in the world to showcase the speed, skill and drama of rugby sevens and inspire many more new players and fans around the world.

“We will continue to work closely with the SA Rugby Union and all other stakeholders to ensure the delivery of a safe and secure world class event for players, teams and fans to enjoy.”

Discounted family and scholar tickets and packages as well as a ‘Party Stand’ package are also available.

The full price list (all prices in South African rands):

“It has been a long, dark winter for the Sevens in South Africa, but this marks our bursting back into the light,” said Roux.

“Health and safety of athletes and fans will be of the highest priority, and the current expectation is that all attendees will need to be vaccinated to gain entry. That requirement may be dropped in due course at which point the requirement will be removed.

“We are envious of sports events around the world, which we have seen the return to full capacity stadia and are very much looking forward to enjoying that experience in Cape Town once again.”

Details of event hospitality, as well as Tour and Travel packages, will be announced in due course.

Supporters wishing to receive updated information directly to their inbox can sign up for the Rugby World Cup Sevens Newsletter at
www.rwcsevens.com/signup