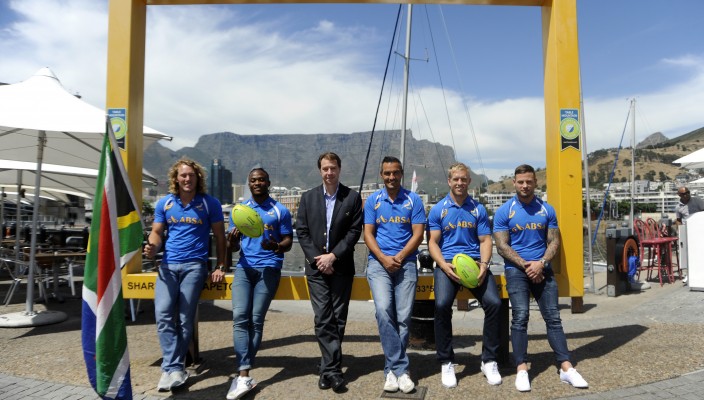 Rugby World Cup Springboks Bryan Habana, Damian de Allende and Lwazi Mvovo are among a host of 15-a-side stars who will be in contention for places in South Africa’s Olympic Sevens squad, the South African Rugby Union announced on Wednesday.

Habana has returned to his French club side Toulon and will join the training camp towards the end of the month.

SARU also confirmed that Springboks Francois Hougaard and Ryan Kankowski had already signed contracts to play for the Springbok Sevens team this season.

“The announcement of this group is a significant achievement for us and it is the culmination of a lot of hard work behind the scenes by Neil Powell (Springbok Sevens coach) and Rassie Erasmus (SARU GM: Rugby Department),” said Roux.

“I’d like to thank our various provincial unions for their willingness to assist the Springbok Sevens coach and management team in planning this new approach.

“Both parties worked very hard to make this arrangement possible. The forthcoming season is the most important in the history of Sevens rugby. The new, expanded World Series and the Olympic Games are two huge challenges and we at SARU want to make sure we give our Springbok Sevens team the best possible chance of success.”

Roux said that following the conclusion of the Rugby World Cup, the focus for the coming season would shift to Sevens, starting with the three-week training camp which gets underway in Stellenbosch on Sunday.

“The signing of players such as Francois Hougaard and Ryan Kankowski is a real coup for us,” said Roux. “It means they will focus solely on the seven-a-side game in the coming season, bringing with them unique skill sets that our Sevens department has identified as being ideal for the code.

“A number of other, highly talented 15-a-side players have also been identified as having great potential in Sevens rugby and, working in conjunction with their provinces, we plan to expose them to tournament play during the course of the HSBC World Series.”

Roux said that the squad was planned in line with SARU’s Strategic Transformation Plan (STP) and was comfortably ahead of the Sevens target for 2016.

Hougaard, the Vodacom Blue Bulls utility back, has played 35 Test for the Springboks and his contract will run from 1 November until after the 2016 Rio Olympic Games. Former Cell C Sharks No 8 Kankowski, meanwhile, is set to join the Bok Sevens at the beginning of February and will remain with the team until August 2016, when the Olympic Games will be staged in Brazil.

Kankowski has already made four HSBC World Sevens Series appearances and he has earned 20 Test caps for the Springboks.

Powell was delighted with the new additions and said he and his management team were looking forward to the exciting prospects of working with the reinforced training squad. “We have a lot of talent in our existing group and there are some very talented players coming through our SARU Sevens Academy,” explained Powell.

“The addition of the group of Springbok and provincial players will raise our game significantly and present us with an opportunity to build an even stronger Springbok Sevens team. It is also fantastic for the brand of Sevens in South Africa that players of the calibre of Hougaard and Kankowski have signed to play for us for a season,” Powell said.

Since taking over the coaching reins in 2014, Powell, has steered the Springbok Sevens to second place on the World Series log, the gold medal at the 2014 Commonwealth Games and automatic qualification for the Olympic Games.