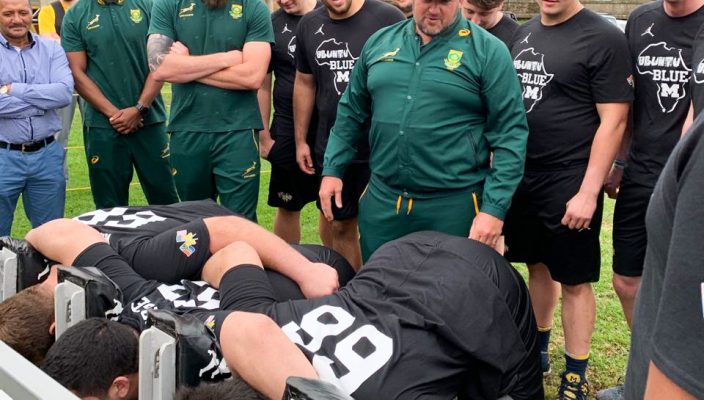 Springboks RG Snyman, Elton Jantjies, Marvin Orie and Aphiwe Dyantyi, as well as members of the Blitzbok squad, gave an impromptu rugby coaching clinic to 100 college football players from the visiting University of Michigan in the USA in Cape Town on Sunday.

The huge traveling group, consisting of 150 players and management members, is visiting South Africa as part of their annual experiential sports and cultural learning programme.

The Wolverines, as they are known in the United States, arrived in South Africa on Friday and visited Robben Island on Saturday before exploring other historical tourism attractions in Cape Town.

A hike on Signal Hill was followed by the Sunday afternoon rugby exchange programme hosted at the UCT rugby fields in Rondebosch, where the Springboks and Blitzboks were joined by members of the UCT and UWC FNB Varsity Cup sides to demonstrate the basic rugby concepts to the eager college football stars.

Here, the Springboks as well as Blitzbok stars Zain Davids and Philip Snyman assisted the local varsity coaches in a fun filled rugby coaching clinic, which also included a group of learners from the Vuka Busy Bees rugby programme.

Members of the Springbok and Blitzbok coaching staff also took time out to demonstrate to the visiting players some of the basic rugby moves.

Jim Harbaugh, the Wolverines’ head coach, said that through the programme, the university wants to allow their players and coaching staff enjoy a wide variety of cultures and sporting experiences.

Their previous trips included similar exchanges in France and Italy, but this is the first visit to Africa for most of the big traveling party.

“The players and coaching staff were just blown away by the amount of enthusiasm for sport in this country,” said Harbaugh.

“Our boys are having a great time and it is wonderful for them to experience the sights, sounds and sporting culture of South Africa.”

Springbok Sevens coach Neil Powell said: “It was a really unique gathering and something special. I appreciated the exchanges of coaching philosophies, it was a nice experience for us as coaches as well.”

Snyman was a big hit amongst the visiting players and said he enjoyed the occasion.

“It was great fun to explain the basics of rugby to them – they learned a lot in the short time we were together and we managed to learn a lot from their sporting experiences and challenges. It was a great exercise and well worth the exercise,” said Snyman.

While the Boks and Blitzboks were interacting with the college players, the Wolverines coaching staff met with the coaching and conditioning coaches of the national rugby squads, to exchange experiences and ideas in their respective fields of expertise.

The group will travel to Johannesburg on Monday before flying back to the USA on Tuesday.