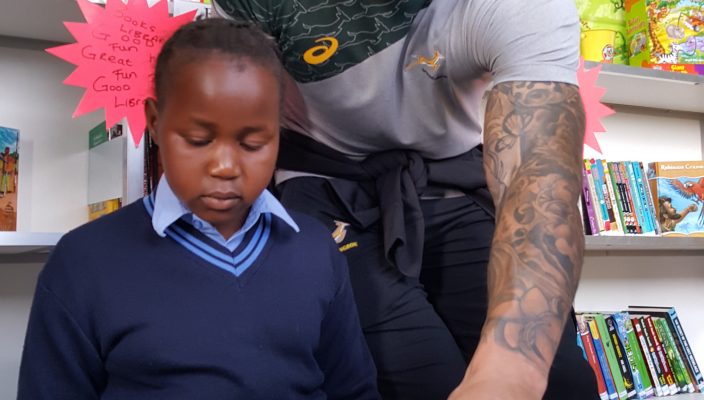 SA Rugby on Friday launched its eighth Boks for Books library, at the Sukumani Primary School in Matsulu in rural Mpumalanga, as the province prepares for the Springboks’ opening Castle Lager Rugby Championship Test against Argentina at the Mbombela Stadium in Nelspruit.

The new library, which forms part of SA Rugby’s Corporate Social Investment (CSI) programme, marks the first of its kind in Mpumalanga, will play a vital role in uplifting the learners of Sukumani Primary School as well as the Matsulu community through literacy.

The library is housed in a mobile container and is fully stocked with books and audio visual equipment, including a television and computer, a Libwin library system, and furniture, all of which has been funded in full by SA Rugby.

“We are delighted to launch our eighth Boks for Books library, and the first of its kind in the Mpumalanga region,” said SA Rugby CEO Jurie Roux.

“Mpumalanga is dear to our hearts at SA Rugby thanks to the deep-rooted passion for rugby and the Springboks in the region.

“Our Boks for Books programme has grown from strength to strength since its inception in 2013 with libraries now being housed in six provinces across South Africa, and we are hope to see it continue to make in-roads throughout the country.

“This library is particularly special because up until today the learners of Sukumani Primary School did not have books, while the nearest library to the school was close to 10km away.”

Roux emphasised the importance of literacy in the development of the country and said:  “Literacy and education is vital to the future of our nation, and we hope that through this programme SA Rugby can continue to make a significant contribution to education in some of South Africa’s needy communities.

“Hopefully one day we will see some of the learners benefiting from this programme follow in the footsteps of the Springboks and our other national players by becoming true professionals in the career path they chose to pursue in future.”

The Boks for Books initiative was born out of a desire to make a difference in South Africa. Government identified education as a No 1 national priority, and with only 8% of the nation’s schools having functional libraries, SA Rugby opted to afford children the opportunity to learn how to read.