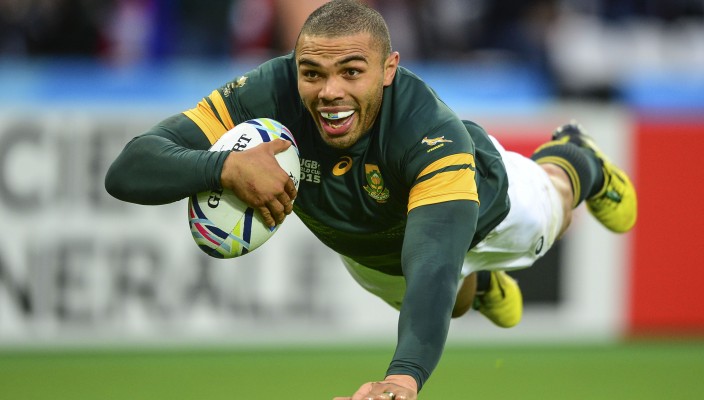 SA Rugby President, Mr Mark Alexander, on Tuesday said record-breaking Springbok wing Bryan Habana, who announced his retirement from the game at the end of the European season, is “one of the greatest South African sportsmen of all time”.

The 34-year-old Habana, the second-most-capped Springbok of all time with 124 Test caps, announced that he will hang up his boots later this year.

Habana, a Rugby World Cup winner in 2007, made his Test debut against England at Twickenham in November 2004, when he scored the first of his 67 Test tries – the most ever by a Springbok.

He amassed 118 Vodacom Super Rugby caps and scored 56 tries at this level in the colours of the Vodacom Bulls and DHL Stormers. He also played four tournaments for the Springbok Sevens team in 2004 and 2016.

“We have been privileged to have witnessed the career of Bryan Habana, who will undoubtedly be remembered as one of the great legends of Springbok rugby,” said Mr Alexander.

“During a career that spanned more than a decade and a half, he stood out as one of the most professional players ever to don the Springbok jersey, and over the years Bryan has been central to many of the most memorable occasions in the era of professional rugby.

“We will never forget every time he delighted us by crossing the try-line or putting in yet another bone-crunching tackle, but those close to him will also remember the Bryan that was a true professional, always going about his task giving 100%.

“He was also a leader in all the teams he played for and set an example to younger players of what is needed to succeed at the top.

“But most of all, he was a proud South African who was a wonderful ambassador to our country wherever he went. When it came to using rugby as a tool for nation-building, Bryan was always in the front of the queue.

“As a player, Bryan has set the bar incredibly high for succeeding generations. He has left behind a legacy of discipline, leadership and professionalism. He and his family can be very proud of all that he has achieved.”

The inevitable moment has come knocking on my door and I’ve welcomed it in for a drink.

It’s been more than a year of hoping, trying, pushing and willing to get back on the field for one last time, to taste the sweet victory or encounter that gut-wrenching despair. To hear the roar of the crowd or grab the pill out of the air. To make that last bone crunching tackle or score that last game winning try. But it’s unfortunately just not to be. I, like most, would have liked my career to have ended differently, but sometimes things don’t turn out quite the way we hope for.

So at the end of this season, it’s time to say goodbye and thank you to the game I so dearly love.

To try and sum up the past 16 years and how quickly they’ve flown by or even begin to describe how amazing the journey has been is impossible. I would though like to express my gratitude:

But most of all to Rugby, because for me it truly is a game made in heaven.

As a close friend once said: “memories are all we have.” And I’m immensely grateful for the memories I take with me into the next chapter.