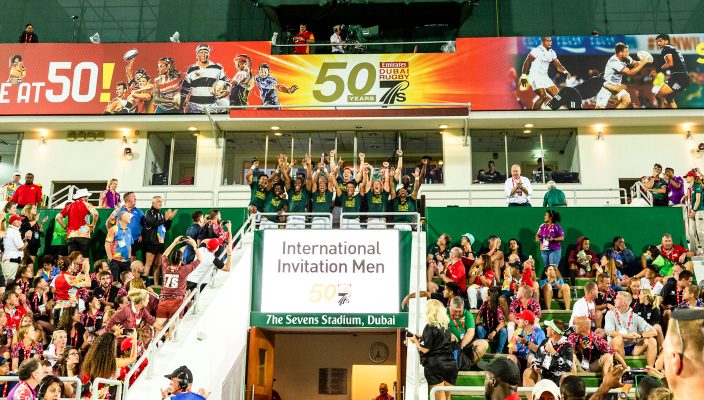 The SA Rugby Sevens Academy claimed the Emirates Airlines Dubai Sevens International Invitational on Saturday, beating The Royal Jesters 28-12 in the final at The Sevens Stadium.

The team went undefeated in pool play and continued that form in the knock-out stages today.

SA Rugby Sevens Academy Manager, Marius Schoeman, praised the squad and said they were on top of their game all weekend.

“We achieved our objectives, no doubt,” said Schoeman.

“We wanted to give some guys game time, like Werner Kok who came back from fifteens in Toulouse and everyone had a good run in the tournament. It is also important for the Academy squad to put pressure on the incumbents in the Blitzboks side and a number of players certainly did that this weekend.”

Schoeman said the competition amongst the players in the wider squads are benefitting both the Blitzboks and the Academy side.
“Both won their finals so that shows good depth and we are doing something right.”

Schoeman praised the quality of players in the current set-up. “We are working towards the Olympics next year, but for now we are looking at working together with the Blitzboks to best prepare the squad that will eventually go there. For now, though, the World Series is the priority,” Schoeman explained.

The South Africans won the final against the Rambling Jesters 28-12. They were trailing early in the match after conceding two tries, but then struck back. First Hacjivah Dayimani raced around his man to score and then Angelo Davids dotted down for the first of three tries in the final.
He followed with his second shortly after to give his side a 21-12 lead at the break. The second half saw more good work on attack by the South Africans and that created the space to Davids to claim another on route to the win.

Earlier in their semifinal, the SA Rugby Sevens Academy outplayed Esperance 17-14.
Hacjivah Dayimani got the first try for his team, before their opponents struck back with a converted try. Impi Visser got one over the line just before the break to edge his side ahead 10-7.

The second half saw an early score by Mfundo Ndhlovu which edged his team ahead 17-7. Esperance did get another try, but the defence was good enough for Stedman Gans and his team to claim victory and a place in the final.
The quarterfinal was a one-sided affair. The Academy outplayed an English invitational team, the Apache 40-5.
Impi Visser, Hacjivah Dayimani, Werner Kok, Dewald Human and Angelo Davids (2) dotted down in this very convincing win.