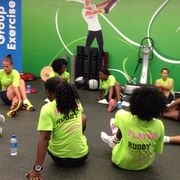 The SA Select Women’s team on Friday started the International Invitational Sevens Tournament in Dubai with a bang by registering victories in all three of their round-robin matches to advance the semifinal on Saturday.

The team got their campaign off to an encouraging start with a convincing 28-0 victory against the West Coast Vikings from Sweden and supported this with a 36-5 victory against local competitors Tuks, which placed them in a favourable position to top their pool before their final match against Moscow Region.

With their confidence up the team continued to produce the goods with another fine display for a 26-10 win to close off the day, which booked them a semifinal berth against the Kenya Lionesses on Saturday.

Almaty RFC will meet Moscow Region in the other semifinal.

National Women’s Sevens coach Renfred Dazel was delighted with their performance and said: “I am pleased with the quality of rugby the ladies produced today. We arrived in Dubai with the goal of finishing as the top team in our pool and we achieved that; the next challenge will be to replicate that form in the knock-out stages. It was particularly pleasing to see the hard work we have put in during the last few weeks on the training field pay off, and it was equally encouraging to see how the new players responded to the challenge of playing in their first overseas tournament.”

Looking ahead at day two, the coach said: “It is vital that we build on this form tomorrow, but we are under no illusions about the challenge ahead. Just as we are determined to lift our performance, the other teams will look to do the same, so the ladies will have to raise their game. However, they showed that they have the talent to win the competition, so it is now a case of sticking to the structures and believing in themselves and their abilities.”