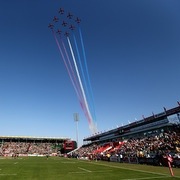 The SA Select Women on Saturday suffered a disappointing defeat against the Kazakhstan Almaty in the final of the International Invitational Sevens tournament in Dubai following an impressive run throughout the series.

The team registered a clean-sweep of victories against Sweden’s West Coast Vikings, Tuks and Moscow Region respectively on day-one to advance to the semifinal against the Kenya Lionesses on Saturday, and to coach Renfred Dazel’s delight they maintained their fine form to hold on for a 19-12 victory.

This booked the SA Select Women a final against the Kazakhstan Almaty, who defeated Moscow Region in their semifinal.

Unfortunately for the team, however, the Almaty proved too strong, with the side registering a 36-12 win to snatch the title.

Dazel, however, praised his team for rising to the challenge on their first tour under his leadership, and said it reaffirmed the faith he had in the group to compete against international opposition.

“Our main objective when we touched down in Dubai was to finish in the top two in our pool and secure a semifinal berth, and we achieved that in style by finishing as the top team in our pool,” said the coach. “Unfortunately we were unable to replicate that form in the final, but this tournament serves as evidence that this group of players has immense potential, which is pleasing. For some of these ladies this tour was a first, and the more experience and confidence they gain the better we will perform. I am proud of the ladies and I am sure they all learned a lot from this experience, which will set them in good stead in future.”