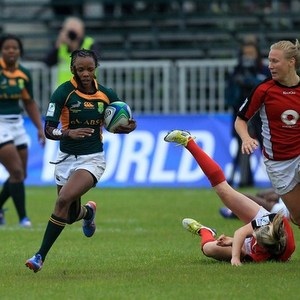 Springbok Sevens coach Renfred Dazel on Tuesday announced a 12-member SA Select Team featuring a balance of experience and youth to participate in the International Sevens Invitational tournament in Dubai from November 28 to 30.

SA Sevens stars Zenay Jordaan, Veroeshka Grain, Mathrin Simmers and Phumeza Gadu, who participated in the 2013 Rugby World Cup Sevens in Moscow in June, will form the core of the group.

Scheepers, however, is a seasoned 15-a-side player and featured in the Springbok Women’s 2014 Rugby World Cup qualifier against Uganda in East London in August, while Sibiloane is a capped member of the SA Under-20 15-a-side Women’s team.

The team will face Belgium, the West Coast Vikings, Tuks Ladies and the Moscow Region teams in the round-robin stages on November 29, with the Cup and Plate semifinals and finals set to take place on November 30.

The squad, which has been based in Port Elizabeth for the last two months to prepare adequately and familiarise themselves with the structures under the guidance of newly-appointed coach Dazel, will depart for Dubai on November 24.

Commenting on the tournament Dazel said: “We are looking forward to the competition. We are in the process of building a new team and we believe the balance of youth and experience in the squad will provide a solid platform to build from. This will also be a good opportunity to expose the younger players to Sevens rugby at a high level and to face some international opposition.”

He said the tournament was also important to groom the players for the qualifying stages of the 2016 Olympic Games.

“One of our mail goals going forward is to qualify for the Olympic Games and that will require quality performances consistently, so we see this tournament as the first step in achieving that,” said the coach. “The players realise the importance of gelling quickly and playing well as a unit to re-establish themselves as one of the top teams in Women’s Sevens rugby, and they have the determination to match that, which is pleasing.”