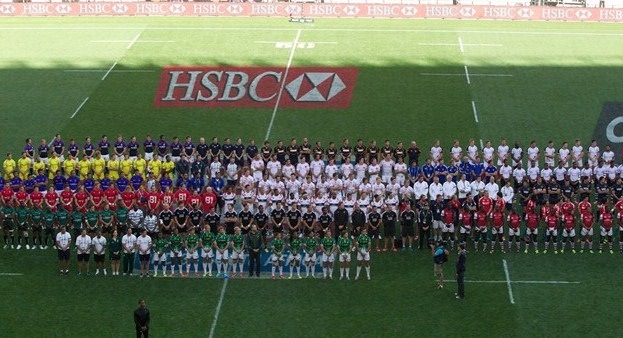 South Africa captain Kyle Brown attempts to sum up the emotional atmosphere at the Nelson Mandela Bay Stadium: “I would love to give you an explanation but my words wouldn’t do it justice. It´s a real honour and a privilege to be a South African today.”

Neil Powell, South Africa’s coach. “It’s been an emotional weekend and the guys are really feeding off the atmosphere inside the stadium today. It is a privilege to play here this weekend.”

Gavin Cowley, TV commentator: “Just being able to pay tribute to Nelson Mandela who I knew personally and have met before was an honour. He was such a special man and I am so pleased that representatives of the whole world were able to be at this stadium named after him to say goodbye to him. It is a time of great sadness but also celebration because we as South Africans know what that great man did for us.”

Frankie Horne, South Africa Sevens: “It was a weird feeling and not something you really want to celebrate, but the crowd was amazing, it is very sad about Madiba. It has given us some motivation but you don’t want to be too emotional because it can drain the body and drain the spirit, we need to focus on the job at hand and go game by game.”

Vincent Deniau, France captain on reaching the Cup quarter finals: “We are happy because Dubai was so bad for us. We have trained a lot and the quarter-finals were the team’s objective. sometimes it is good to be bad and the coach has made us learn how to work this week.”

A jubilant Argentina coach Santiago Gomez Cora: “I can’t believe it but we are growing as a team game by game, and here we top our pool. Tomorrow if we do the same as today I will be happy.”

Portugal captain, Pedro Leal, after beating Wales: “We played really well. We weren’t really there against New Zealand earlier. We trained well in the week and now we are in the Cup quarter-finals like last year.”

Fiji coach Ben Ryan, following a 26-5 defeat of Australia: “I thought we we a bit sluggish, maybe a little casual at the start. I’ve told the boys there’s a target on our back (after last week’s victory). They were probably shocked at the amount of physical exercise I’ve made them do of late but I wanted them ready for this weekend.”

Wales captain Lee Williams after beating the USA: “We got a little complacent after kick-off after we were three tries up. But we dug deep and came up with the victory. It’s great to have James (Davies) back after missing the last two matches in Dubai, and you can see why in that match.”

Courtesy of IRB
Photo: All 16 teams and the referees pay their respects to Nelson Mandela in the stadium that bears his name –
Photo: IRB/Martin Seras Lima