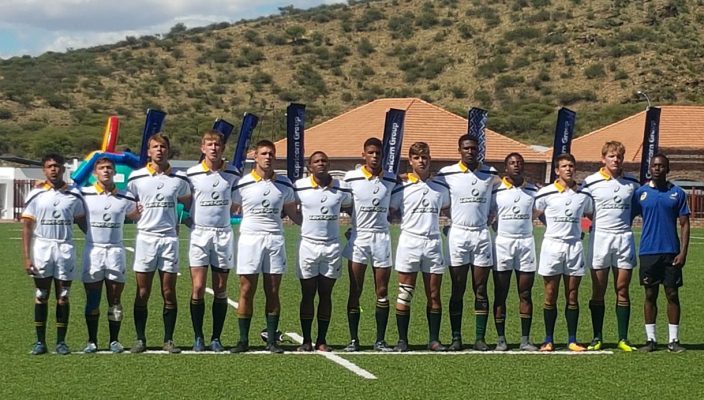 The SA Rugby Under-18 Sevens Academy team defended their title in the Capricorn Windhoek International 7s in style on Saturday as they thumped Germany 46-0 in the final to finish the tournament unbeaten.
Such was the team’s dominance throughout the competition, they scored 333 points in their six matches over the two days and conceded only seven.
The team was in fine form from the outset as they registered convincing victories in all three matches on Friday, starting with a 55-0 victory against Zambia before thumping Zimbabwe 71-0 and hosts, Namibia, 42-7.
They continued this fantastic form on Saturday as they outplayed Germany 42-0 and then cruised to a 77-0 win against Botswana.
These convincing results earned them the top spot on the log table and a place in the final against Germany, who were in second position, and coach Marius Schoeman’s team ensured that they took the silverware as they powered their way to a 46-0 win thanks to another top-class performance.
Schoeman was delighted about the victory and said: “We are very proud of the boys for winning the tournament for the second consecutive year. We registered some big scores, but it was not about that for us. We were more pleased about the fact that we only conceded one try in the entire tournament, and that is what we measured ourselves on.
“What makes this victory particularly significant is that we only had one training session before the tournament, and that was on Wednesday. Before that we trained as a big squad of 25 players back in November at the trials.
“The players really put up their hands and showed that they want to be part of the African Youth Games, which will serve as the qualifier for the Junior Olympic Games later this year, and the whole Blitzboks family.”
SA Rugby U18 Sevens Academy results in the Capricorn Windhoek International 7s:
Saturday, 10 March:
SA 42-0 Germany
SA 77-0 Botswana
SA 46-0 Germany (Final)
Friday, 9 March:
SA 55-0 Zambia
SA 71-0 Zimbabwe
SA 42-7 Namibia