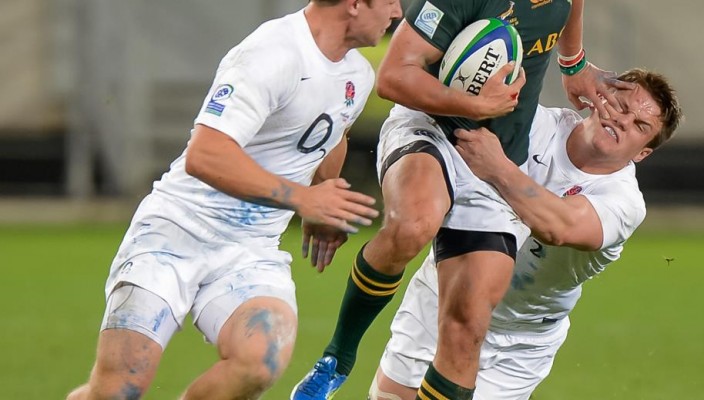 May 8 • BabyBoks U20, General News, International, Junior Rugby • 3058 Views • No Comments on SA u20 BabyBoks team to play Namibia

The SA Under-20 side to face the senior Namibia rugby team on Saturday on Stellenbosch was announced on Wednesday in Cape Town.

Kick off time is 14h50 at the Paul Roos Markötter Stadium and the match will be played after the traditional Cape schoolboy derby between Paul Roos and Paarl Gymnasium.

The players who were not considered because of injury are Hanco Venter (scrumhalf), Handré Pollard (flyhalf), Dries Swanepoel (centre), Jan Serfontein (centre) and Sergeal Petersen (wing).

The match is the last outing for the Junior Springboks before they embark on their IRB Junior World Championship journey to defend their title next month year in France.

Dawie Theron, the SA U20 coach, said he was looking forward to see the Junior Springboks in action.

“Namibia will pose a huge physical challenge, which will be very good for our boys. We need another good workout before we leave for France and this match will give us a wonderful opportunity to test our various combinations,” said Theron.

Theron said that despite the several injuries amongst the backs, his team still packs some very good firepower in the attacking department.

“We are really fortunate to have such big a pool of very good attacking players and I am really excited and looking to see them in action. However, the backs can only play display their true potential if the forwards do their job,” added Theron.

The team will have one more training session on Thursday morning before moving camp to Stellenbosch in the afternoon.

The South Africa Under-20 team: