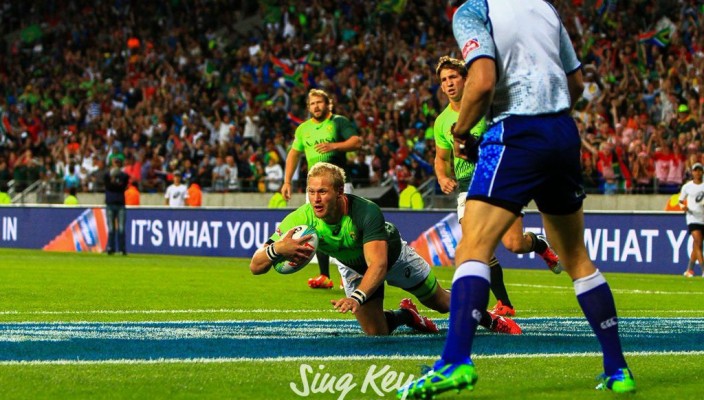 The Springbok Sevens will kick off the defense of their Dubai Sevens title with a testing encounter against a powerful Samoan outfit on Friday morning. The Pool B match starts at 07h44 (SA time) and will be televised live on SuperSport.

The forthcoming season is undoubtedly the most important one in the history of Sevens rugby, with the HSBC World Rugby Sevens Series now enlarged to include ten tournaments in iconic cities across the globe, as well as the historic debut of the sport at the 2016 Rio Olympics Games.

South Africa have returned to Dubai with six members of last year’s winning squad, while the 12-man squad features Springboks Francois Hougaard and Juan de Jongh. Hougaard will make his Sevens debut while De Jongh is set to play in his first World Series event since 2008, when he made his only appearance in Wellington.

Neil Powell, the Springbok Sevens coach, said although his team are the defending champions, they know that two testing days of rugby await them at The Sevens Stadium.

“As defending champions here in Dubai we can’t become complacent, we have to start all over and take it one game at a time. It will be important for us to make a good start because that would give us some momentum for our home tournament in Cape Town,” explained Powell.

South Africa, with Werner Kok, the reigning World Rugby Sevens Player of the Year, and Seabelo Senatla (the top try scorer in the Series last season) in its line-up, will have to navigate their way through a tricky pool consisting of Samoa, Russia and Scotland. Their first aim is to clinch one of the two top spots in the group and with that qualification for the knockout stages on Saturday.

Note to editors: The latest Springbok Sevens media guide and rights-free audio clips, featuring the Blitzboks coach speaking in English and Afrikaans, are now available for download. To access and download these items, please click here.

The SA fixtures on Friday at the HSBC Dubai Sevens:

*All matches live on Supersport.