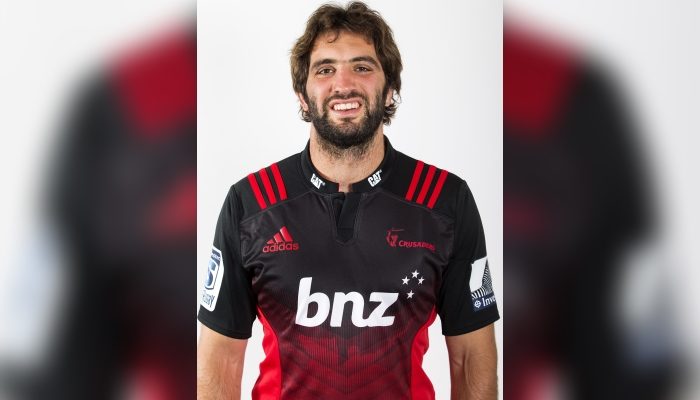 All Blacks, BNZ Crusaders and Canterbury lock, Samuel Whitelock, and New Zealand Rugby (NZR) have agreed a new deal, with the Test centurion signing through until 2023.

The re-signing of the two-time RWC champion will see Whitelock anchor a core group of All Blacks who have signed with NZR post 2019.

NZR CEO Steve Tew said: “This is a major re-signing for us and we’re absolutely delighted that Sam has chosen to sign a four-year deal. He’s a world-class player, an All Blacks Centurion, the most capped All Blacks lock of all time and he carries immense mana.

“His recommitment alongside a number of other key players gives us a strong foundation for the next four years. I know the news will be welcomed by fans here in New Zealand and around the world.

“As well as Sam, I’d like to thank his wife Hannah and his agent Warren Alcock who played a key role in the contract negotiations and were fantastic to deal with.”

Under the terms of the deal, Whitelock will take a break from New Zealand rugby at the end of this year to take up a short-term contract with Japanese club Panasonic.  He will miss the 2020 Investec Super Rugby season and return to New Zealand at the end of the Japanese Top 14 season in May 2020.

Tew said: “We know our players have a number of choices to make when it comes to where they play their rugby and we have to be flexible when it comes to renegotiating with our leading players, and that’s what we have done with Sam.

“He’ll have a short break away with his young family and experience a different culture, before returning to New Zealand.  We think having a short playing stint in Japan as part of a long-term, four-year commitment is a win-win for him and us.”

Tew said NZR’s Board had also given NZR approval to allow Whitelock to be selected for the All Blacks in 2020, a decision made on the basis of his long-standing and outstanding service to New Zealand Rugby and the fact he had signed a four-year deal.  Whitelock also has exit clauses in his contract.  Whitelock had already been signed through to 2020 but had decided to negotiate a longer contract early.

Whitelock said: “I’m grateful to New Zealand Rugby, the Crusaders and Canterbury Rugby for their support of myself and my family in making this decision, and I’m really proud to commit to these teams for the next four years.

“Ultimately, this decision allows me to take some time with my family to experience a new rugby environment in Japan, before coming back refreshed and ready for the remainder of 2020 and beyond. I’m pleased there is clarity around my playing future, so I can focus on the remainder of this 2019 season with the Crusaders.”

All Blacks Head Coach Steve Hansen said: “Sammy is a very special player, an outstanding athlete, and has been a hugely respected leader in our group for some time now.

“Together with Brodie Retallick, he has been part of what we consider one of the world’s best locking combinations, but he is very much a world-class player in his own right.  He’s a deep thinker on the game, cares passionately about the All Blacks and has done incredibly well in the handful of Tests which he has captained so far.

“Knowing that he has recommitted for four more years is huge for the All Blacks, the Crusaders and New Zealand Rugby.  We’re all incredibly proud of what he has achieved so far in the jersey and look forward to the next four years.”

BNZ Crusaders CEO Colin Mansbridge said: “We are extremely fortunate to have a player of Sam’s immense talent and character re-commit through to the 2023 season. Sam has endeared himself to the entire Crusaders organisation since his Super Rugby debut in 2010, with his reliable work ethic and humble leadership.

“While we’ll miss him next season, this is an incredible opportunity for Sam and his family to head over to Japan for a few months, before returning to New Zealand to continue his rugby career with the All Blacks and Crusaders.”

BNZ Crusaders Head Coach Scott Robertson added: “Sam is one of the world’s best locks, he’s an inspirational leader and draws the best out of myself as a coach, and the playing group.

“As Captain, Sam has laid the foundation within our leadership group to ensure the squad is in great shape next season and beyond. It’s a testament to his character that he will return to our group in 2021 to continue adding to his legacy with New Zealand Rugby and the Crusaders. We hope Sam, Hannah and their young family have a great experience in Japan.”Canterbury Head Coach Joe Maddock said: “Sam epitomises the qualities of the Canterbury man; he is honest, hard-working and always leads from the front, as we’ve seen from him consistently at provincial, Super Rugby, and international level. He’s a player who has already achieved so much in his career, and we look forward to what he will continue to achieve over the next four seasons.”M

30-year-old Samuel Whitelock epitomises the modern lock: agile, mobile, athletic and a formidable force with ball in hand, and he is also a capable and smart leader. Whitelock is the most capped All Blacks lock of all time and became a Test centurion last year in the first Bledisloe Cup Test against Australia. He first captained the side against Wales in Cardiff in 2017, and also stood in for Kieran Read in the 2018 Steinlager Series. Originally from the Manawatu, he moved to Lincoln University in Canterbury and graduated with a Bachelor of Science.  He made his provincial debut for Canterbury in 2008 and his Investec Super Rugby debut in 2010. He made his Test debut in 2010, scoring two tries on debut. Whitelock played in all seven All Blacks matches at RWC 2011 and again at RWC 2015. Whitelock has captained his Crusaders for the past three seasons, leading the team to their back to back Investec Super Rugby titles in 2017 and 2018 and has played more than 130 Crusaders matches. He became a Super Rugby centurion in 2016 against the Rebels in Christchurch. As a younger player, he locked for New Zealand Schools in 2005 and 2006, New Zealand Under 19 in 2007 and was part of the 2008 New Zealand Under 20 side that claimed the inaugural Junior World Championship. His grandfather Nelson Dalzell, great-uncle Allan Elsom and brothers George and Luke have also played for the All Blacks while brother Adam played for the All Blacks Sevens and father Braeden played for Manawatu.