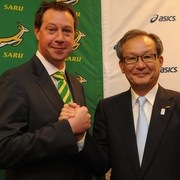 The South African Rugby Union (SARU) on Wednesday named sports performance brand ASICS as the new apparel sponsor of the Springboks and their associated national teams.

As well as providing kit to the Springboks, ASICS will supply kit and apparel to their associated national teams – including the women’s and all age-group teams, as well as SARU referees.

“This deal with leading sports performance brand ASICS is a huge coup for SARU, and one we’re very excited about,” said Jurie Roux, SARU CEO. “We are entering an enormously important period for South African rugby, encompassing two Rugby World Cups, as well as a new Springbok era under coach Heyneke Meyer. ASICS’ high level technical apparel and global brand reputation will help us both on and off the field.

“Making use of local manufacturers was one of the criteria in the tendering process and we have been impressed in the way ASICS has approached this. Their team has already held a number of discussions with potential suppliers around the country.”

ASICS will provide SARU with the highest level technical apparel, benefitting from the expertise gained by research at the company’s Institute of Sport Science and provide specific technologies to improve performance, through posture management and muscle support.

Alistair Cameron, President and CEO of ASICS EMEA, said: “ASICS has a long and proud tradition of partnering with athletes, teams and federations and we are extremely excited about expanding our cutting edge performance products into the rugby market and in particular working alongside one of the leading partners in that market – the South African Rugby Union.

“With South Africa providing huge growth potential, ASICS’ partnership with SARU is a chance for us to continue to build our brand awareness and positioning in the South African market, whilst also supporting the Springboks in their quest to become the number one rugby side in the world.”

Roux said the new ASICS designed playing apparel would only be revealed later in the year. It will make its first appearance in action in next year’s HSBC World Sevens Series event in the USA in January.