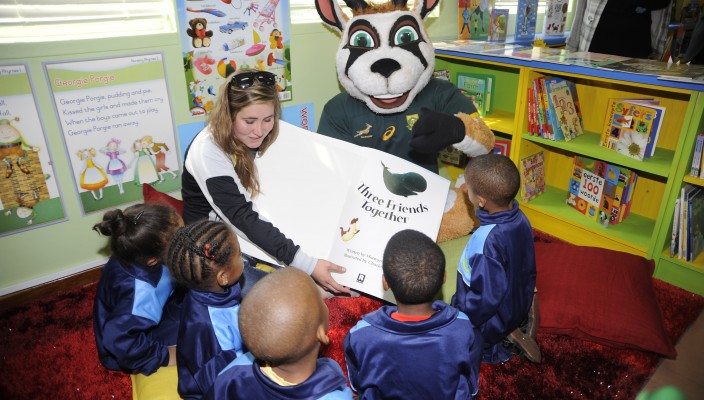 The South African Rugby Union (SARU) on Thursday continued its drive to boost literacy in South Africa with the launch of its fifth Boks for Books library at JJ Rhode Primary School in Elsenburg in the Stellenbosch Winelands.

The library, which is housed in one of the former classrooms, is fully stocked with books, audio visual equipment including a television and computer, a Libwin library system and furniture, and has been funded in full by SARU.

JJ Rhode Primary School has a total of has 253 learners from Grade R to Grade 7 and caters for children in the farming community. These learners have limited access to information at home, and have to rely mainly on the learning materials provided at school.

It is the second library to be launched in the Western Cape, with the other library situated in Paarl.

Similar Boks for Books libraries have been launched in KwaZulu-Natal, the Eastern Cape and Gauteng since 2013.

“Literacy is critical to the future of our nation, and we hope that by giving back to the community through the provision of libraries we will be able to make a sustainable contribution to education in South Africa,” said SARU CEO Jurie Roux.

“The Springboks and all our other national players may be popular because of their heroics on the rugby field, but literacy and education, and the discipline associated with that, played a crucial role in their success. Through this Corporate Social Investment (CSI) initiative, we hope to see some of these learners follow in their footsteps, whether it is on the rugby field or in a different line of work in future.”

The Boks for Books initiative was launched by SARU in 2013 and was born out of a desire to make a difference in South Africa. Government identified education as a No1 national priority, and with only 8% of the nation’s schools have functioning libraries, SARU opted to afford children the opportunity to learn how to read.

“We believe that with the establishment of this library at our school we will be able to nurture the pupils’ love for reading,” said the school’s headmaster Edward Adams. “Reading will improve their general knowledge and vocabulary, and this will improve their literacy and comprehension results considerably in the future.

“The learners will be able to experience and appreciate a real library, something that will confirm other values like appreciation and responsibility. For that we thank SARU.”