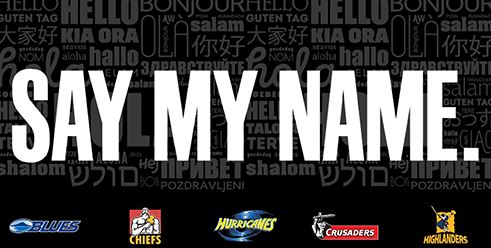 Say My Name is back in Investec Super Rugby

The Say My Name Round is back in Investec Super Rugby this week, with all five New Zealand clubs stepping up to celebrate rugby’s diverse community by focussing on what makes people truly unique and reflects their identity – their name.

Building on the 2018 Say My Name round, the 2019 edition promises to be just as entertaining, with players from the Blues, Chiefs, Crusaders, Highlanders and Hurricanes helping people get their heads – and their tongues – around some of the more commonly mispronounced names.

As well as encouraging fans to pronounce people’s names correctly – or at least give it go – the players are taking it one step further this year by sharing some of the different stories behind their names.

Leading things off again is former All Black Piri “not Perry” Weepu, in a compilation video New Zealand Rugby (NZR) hopes will once again guide fans in how to say the players’ names – and how not to.

Weepu said: “We’re encouraging everyone to ‘Say My Name’ this week and make a real effort to get some of our (players) names right. Practice makes perfect, and what better way to show respect.”

NZR Chief Rugby Officer Nigel Cass said the round was about celebrating the many diverse and unique cultures that make up the rugby community.

“Rugby is made up of people from all sorts of different backgrounds and cultures and we want everyone to know it is truly a Game for All.

“Our players have jumped on board again this year to teach fans how to, and how not to, say their names. It’s not about getting it right first time, or every time, what’s important is giving it a go and having a bit of fun too.”

The round is part of an overarching program to celebrate and increase diversity at NZR and across rugby. This has included NZR Board, Executive and Senior Leadership all undertaking unconscious bias training, the continued integration of Tikanga into NZR processes, a program to increase Pacific participation in non-playing roles, and will include the celebration of Samoan Language week and Te Wiki O Te Reo Maori (Maori Language Week).