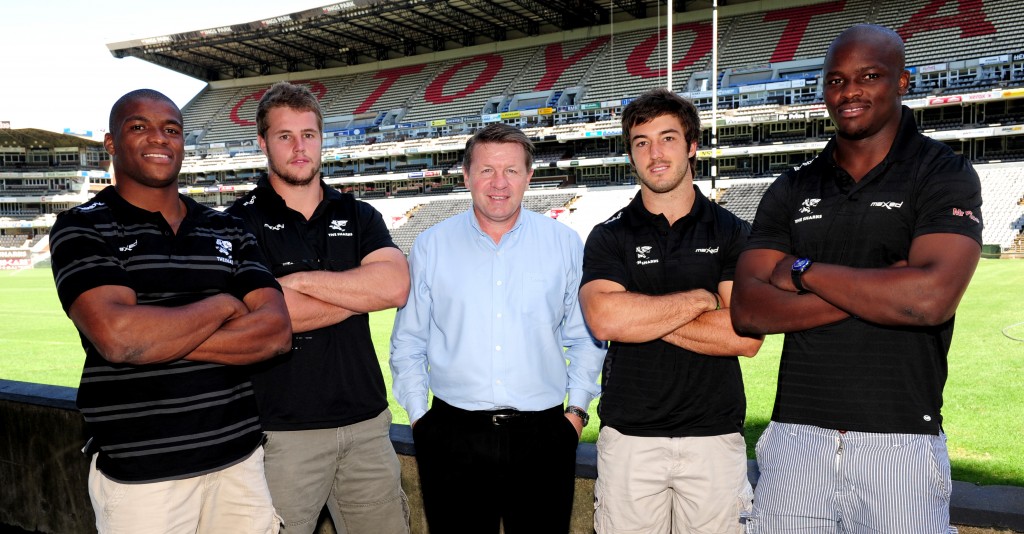 Hans Scriba (centre), director of The Sharks Academy, with former Kearsney Easter Rugby Festival players who have since progressed to playing for the Sharks. From left, S’Buru Sithole, Allan Dell, Paul Jordaan and Terror Mthembu

Talent scouts, coaches and selectors will be eyeing Kearsney Easter Rugby Festival players who show the potential to play professional rugby in the near future.

They will be looking for players who make good decisions under pressure and who possess great skills, speed and agility.  These skills and attributes were more important than sheer size and brawn, said Hans Scriba, director of The Sharks Academy.

“Our aim is to keep the top schoolboy rugby players from KZN here at The Sharks, as well as to recruit some other top players from around the country. This festival provides us with the opportunity to view and to assess ‘the best of the best’ in SA schoolboy rugby.”

He said the festival provided a platform for the cream of KZN schoolboy talent to measure up against the best from around South Africa.  Play days will be Thursday 28, Saturday 30 March and Monday 1 April.

The Kearsney festival has grown from strength to strength and the quality of participating schools this year is testimony to the fact it has become the country’s premier schools rugby event.

At the end of the festival three of the best players will be awarded scholarships. This includes a contract with the Sharks Academy and an academic bursary from one of their education partners. Each of these three awards is valued at R100 000 per annum.

More than 90 players from the previous five Easter festivals at Kearsney have gone on to study at the Sharks Academy – 21 having played in last year’s event.

Players from previous Kearsney festivals who have joined the Sharks Academy and already progressed to play for the Sharks are Paul Jordaan (Grey College), Terror Mthembu (Dale College), S’buru Sithole and Allan Dell (both Queens College). Scriba said these players certainly had the potential to play for the Springboks in the future.