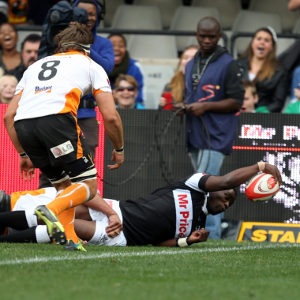 The Sharks and DHL Western Province will have semifinal spots in their sights when they line up in the Absa Currie Cup Premier Division this weekend, while the Vodacom Blue Bulls and GWK Griquas will be fighting for survival as only three pool rounds remain.

The Sharks and Western Province need only three more log points from their remaining matches to secure their semifinal spots, although victories will nudge them closer to obtaining home semifinals.

On the lower end of the log, the Blue Bulls and Griquas harbour faint hopes of semifinal berths, as they would have to win all their remaining matches and hope that the MTN Golden Lions and Toyota Free State Cheetahs experience a severe slump to sneak into the semifinals. However, the fact that they still have a mathematical chance is expected to fuel their motivation to win this weekend.

In Friday’s matches the Toyota Free State Cheetahs meet DHL Western Province in Bloemfontein and the MTN Golden Lions take on The Sharks in Johannesburg. On Saturday GWK Griquas meet the Vodacom Blue Bulls in Kimberley.

The clash in Bloemfontein is expected to feature a massive forward battle with the Toyota Free State Cheetahs and DHL Western Province boasting physical, yet mobile packs. Should the game open up, however, it could prove to be exciting, especially since both teams have players offering an X-factor. The Cheetahs, in particular, will be under pressure to register a victory as a defeat would allow either the Blue Bulls or Griquas to close in on them on the log depending on the outcome of their match in Kimberley, which could place the Bloemfontein side’s semifinal hopes in jeopardy. They will also be desperate to make up for their 50-26 defeat against the Sharks last week.

Cheetahs coach Naka Drotske made a few changes to the team that went down to the Sharks last week, with the most notable being the inclusion of Springbok prop Trevor Nyakane at tighthead and regular lock Teboho Mohoje starting at flank. Piet Lindeque also earns a start as a replacement for Raymond Rhule. Western Province coach Allister Coetzee, meanwhile, welcomed back Springbok flank Schalk Burger, who last played 18 months ago, and captain Deon Fourie, who was on the sidelines for the last two weeks with a rib injury. Flank Michael Rhodes also makes his return after a one-week suspension, while centre Michael van der Spuy will replace Juan de Jongh, who joined the Springbok team.

MTN Golden Lions vs The Sharks

The clash in Johannesburg should be thrilling as both teams have shown good form this season and come off morale-boosting victories. Their strong presence up-front aside, the teams have been the best attacking sides so far in the competition, which sets the scene for an exciting match. Interestingly each of the teams have won three of their last six match-ups. However, all the Lions’ victories were at home, which included their 42-16 victory in the 2011 final, which will serve as a motivational factor.

Both the Lions and Sharks coaches have made two changes to their starting teams, with Johan Ackermann recalling looseforward Warren Whitely after his layoff due to a hip injury, while Chris van Zyl earns his second start at lock after also recovering from injury. Hard-working looseforward Willie Britz will start on the bench following a shoulder injury. The changes in the Sharks team were at flank where Justin Downey replaces Marcell Coetzee and at lock where Stephan Lewies replaces Pieter-Steph du Toit, following their national call-ups.

The clash in Kimberley is expected to be a tight affair as the GWK Griquas and the Vodacom Blue Bulls will be driven by desperation to stage a dramatic comeback in the series in the hope of sneaking into the semifinals despite the odds being stacked against them. With both teams priding themselves on their forwards, the clash will be physical. But the teams will be hoping that the injection of pace and other skills to their starting teams through a few personnel changes will add something extra on attack.

Blue Bulls coach Pine Pienaar has made six changes to his team, which sees Handrē Pollard reclaim the No10 jersey and centre William Small-Smith and lock David Bulbring earn their first starts for the Pretoria team. Wing Sampie Mastriet, prop Marcel van der Merwe and fullback Jurgen Visser also earned starts. Griquas coach Pote Human also made a handful of changes to his team with Marnus Hugo starting at scrumhalf and Richard Lawson on the wing, while centre JP Nel returns from injury.