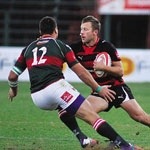 The Absa Currie Cup First Division will reach boiling point this weekend as the top four teams in the competition battle it out for places in the final following 14 taxing weeks of round-robin matches.

Log-leaders the Steval Pumas, who finished the pool stages unbeaten, host the SWD Eagles at the Mbombela Stadium in Nelspruit and defending champions, the EP Kings, take on the Leopards at the Nelson Mandela Bay Stadium in Port Elizabeth in the semifinals on Friday.

With the Steval Pumas having been in impeccable form this season, with the side boasting the best attack and defence in the series, and the luxury of home ground advantage counting in their favour, they will enter their clash against the SWD Eagles as favourites. The hosts will also enter the clash with a mental edge after winning both round robin matches against the sides. However, the visitors will draw immense confidence from the fact that in the last outing between the teams, they only went down 28-27.

With both teams having proved their effectiveness on attack this season, the match could be entertaining should the teams opt for a loose style of play rather than a cautious approach. But the Eagles will have to improve their defence, as they conceded the third-highest number of tries in the competition. They will also have to be disciplined to keep alive hopes of an upset as Pumas’ flyhalf Carl Bezuidenhout has earned the reputation as points machines thanks to his accurate goal-kicking. Eagles fullback Justin van Staden, however, has also been accurate with the boot this season, which means they too have the ability to accumulate points should the Pumas infringe.

Pumas coach Jimmy Stonehouse named his strongest possible team for the clash with speedsters Coenie van Wyk, JW Bell and Rosko Speckman as his back three and Bezuidenhout at pivot. Unfortunately for the coach his other pin-point goal kicker JC Roos has been ruled out due to injury. The Eagles, meanwhile, made a handful of changes to their team, especially among the backs, with Martin du Toit starting at flyhalf, and the dependable Justin van Staden and Anver Venter at fullback and centre respectively. Van Staden and left wing Alshaun Bock, in particular, are expected to be key players given their impressive form this season.

In Port Elizabeth the EP Kings will enter their clash against the Leopards with an edge with form and confidence counting in their favour. While the Leopards have battled to maintain consistency in their performances this season, the defending Absa Currie Cup First Division Champions come off six successive victories. Similarly to the Pumas, the Kings’ high try-scoring rate and respectable defence allowed them to finish among the top two sides in the competition, meaning the Leopards will have to produce a solid all-round performance to secure their first final appearance since 2008.

The Leopards won the first round-robin match between the teams, while the Kings emerged victorious in the second. But interestingly, the Kings won all three matches against the Potchefstroom team last year, which included a convincing 50-27 victory in the semifinal.

The forward battle, and particularly the breakdowns, are expected to be key areas in the match, but the teams also have exciting backs, who have made their presence felt this season. Both coaches named unchanged starting teams for the clash, which they hope will offer continuity in selection and winning momentum. The Kings will look to the likes of experienced flyhalf George Whitehead, wing Michael Killian, fullback Scott van Breda and lock Steven Sykes to lead by example as they attempt to book their fourth successive final berth. The Leopards, meanwhile, will be hoping that star wings Luther Obi and Edmar Marais, centre and place-kicker Adriaan Engelbrecht and forwards SJ Niemand and skipper Brendon Snyman are on form, as they have been key figures in guiding the team to the semifinal. Engelbrecht, however, will have to be back on song with the boot this week after failing to slot over a single goal-kick last week, as every point counts this week.