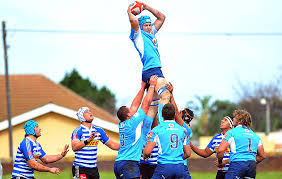 Seven out of seven for Blue Bulls u19

The Vodacom Blue Bulls continued to show their superiority over their opponents in the Absa Under-19 Provincial Championship this past weekend as they powered their way to a seventh consecutive victory to remain on top of the standings.

A convincing victory for the Sharks, meanwhile, allowed them to remain in the running for a home semifinal with five rounds remaining, while DHL Western Province registered their second win of the season to remain within range of a semifinal berth.

In the weekend’s matches DHL Western Province defeated Toyota Free State 22-5 in Stellenbosch, the Sharks thumped Border 41-5 in Durban and the Vodacom Blue Bulls outplayed the Leopards 48-12 in Pretoria.

Two tries in the opening 13 minutes by DHL Western Province combined with a fantastic defensive effort placed them on the front foot against the Toyota Free State in Stellenbosch. The visitors stepped up their defence soon after and countered WP’s attacking efforts, resulting in the Cape side failing to add to their score in the half. But the home team’s defence was equally effective, which left the visitors scoreless in the first 40 minutes.

Western Province continued to apply pressure on Free State in the second half, and their perseverance paid off as they managed to breach the Bloemfontein side’s defence two more times to secure their bonus point victory. The visitors, meanwhile, had only a last-minute try to show for their efforts in the match.

In Durban the Sharks’ patience on attack and their ability to use their try-scoring chances allowed them to outclass Border. Both halves were riddled with penalties, which the teams battled to take full advantage of as they missed several kicks at goal. But it was the Sharks knack at finding the gaps in the defence in between, which allowed them to build their lead steadily as the game progressed.

In total the Sharks scored six tries to only one by Border, which kept them within striking range of the pace-setters in the series.

The visitors showed their fighting spirit shortly after the break as fullback Lloyd Greeff crossed the line to put the team on the scoreboard. But three tries in four minutes by the Blue Bulls and another in the 66th minute dashed their hopes of a brave comeback. The Leopards, however, fought until the end, which earned them their second try in the dying seconds to push their score into double figures.