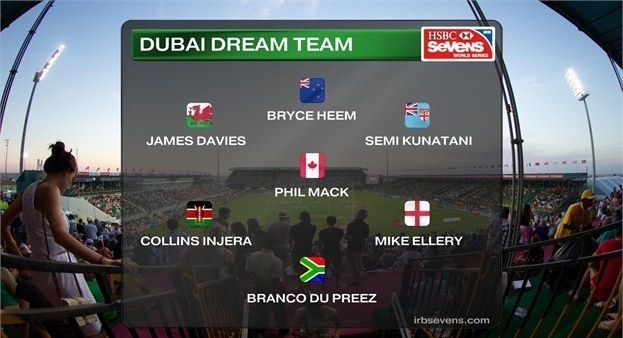 Seven to watch out for at #SA7s

At each of the nine rounds on the HSBC Sevens World Series fans have the chance to vote who they think deserves a place in the #SevensDreamTeam.

Last weekend at round two of the HSBC Sevens World Series in Dubai there were a great many players put forward and it was a tough task for the broadcast commentators to choose the final seven.
Unsurprisingly, there were worthy mentions for Fiji’s Benito Masilevu and Samisoni Viriviri as well as Canada’s John Moonlight, New

Zealand’s Joe Webber and Scotland’s Colin Gregor.
But here are the seven stars who the fans and commentators thought most lit up the Emirates Dubai Rugby Sevens. Luckily for the fans, all seven are fit and available to their respective coaches for this weekend’s Cell C Nelson Mandela Bay South Africa Sevens in Port Elizabeth.

James Davies, Wales
The younger brother of British and Irish Lion Jonathan, Davies was in fine form in Dubai, scoring five tries and ending the tournament as the joint second-highest, despite missing the Plate semi-final and final through injury. Declared fit for this weekend, though, the loose forward will be looking to pick up where he left off.

Bryce Heem, New Zealand
Another forward in Sevens with try-scoring abilities, Heem scored four in Dubai and apart from that semi final defeat to Fiji, helped control New Zealand’s forward trio beautifully alongside captain DJ Forbes and Scott Curry. He also scored one of the decisive tries in their tight Cup quarter-final win against Argentina. A giant wing in the 15-man game, Heem won the South Africa Sevens three years ago but is yet to play at the Nelson Mandela Bay Stadium and will be itching to get out onto the field.

Semi Kunitani, Fiji
Nominated by the fans as best #sevensrookie in Dubai but it is not often we see a debutant have such an impact in his first Series event. However, Kunitani went from strength to strength in Dubai, scoring in both Fiji’s quarter and semi-final wins. He will also have learned a lot playing alongside Pio Tuwai and Benito Masilevu, both of whom could easily have made this list.

Phil Mack, Canada
Mack scored 31 points at the Emirates Dubai Sevens, including 16 against neighbours USA, a fixture he always relishes. The Canadian stalwart scored one of the seven best tries of the weekend and has already said that his side need to ‘right it up’ this weekend, having missed the Cup quarters, so expect him to lead from the front alongside captain John Moonlight.

Collins Injera, Kenya
Scorer of three tries in Dubai but the experienced architect of much of their best work, the Kenyan winger now has six for the season and is never short on speed. One of the fans’ favourites and scorer of the best try in Australia at round one, Injera will now be looking to score some tries on African soil alongside his roommate, the returning Billy Odhiambo.

Branco du Preez, South Africa
Port Elizabeth brings a home tournament to savour for du Preez, who also had a try singled out in the ‘Seven of the Best’ from Dubai. One of the best steppers in the game, the South African maestro is central to the Boks’ creativity alongside Cecil Afrika in Neil Powell’s squad.

Mike Ellery, England
Twenty four-year-old Ellery has burst onto the Sevens scene this season and is even challenging Dan Norton for a starting position in the backs. As the second quickest in the squad according to stats, Ellery also has power to back up his raw speed. Four tries in Dubai take his tally for the season to eight and the wing is sure to score more in Port Elizabeth this weekend.