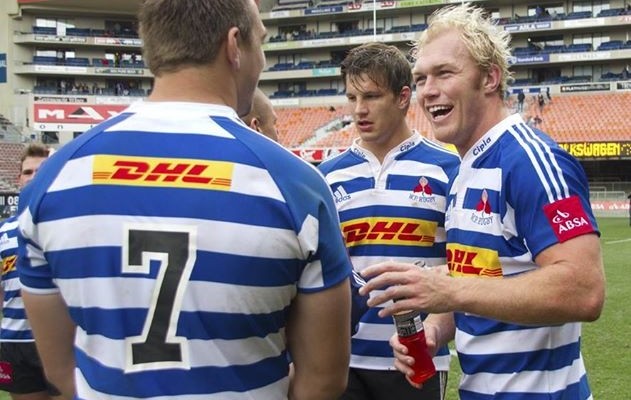 DHL Western Province and The Sharks this weekend succeeded in their mission to book home semifinals in the Absa Currie Cup Premier Division as they fought their way to their seventh victories of the season.

Western Province’s bonus point 36-23 victory against the MTN Golden Lions in Cape Town on Saturday allowed them to leapfrog the Sharks on the log standings, as the Durban-based team earned only four points for their narrow 18-16 victory against the Vodacom Blue Bulls at Loftus Versfeld.

In the other match the Cheetahs registered a convincing 52-21 victory against GWK Griquas in Kimberley to stay in the top four for a semifinal berth. This also allowed them hop above the Lions on the log table. With the Bloemfontein team boasting five more log points than the fifth-placed Blue Bulls, they need only a bonus point in their final match to guarantee a semifinal berth if the Pretoria team wins their last clash with a bonus point.

The fourth-placed Lions, meanwhile, are four points ahead of the Blue Bulls on the log, meaning they will still have work to do to secure a semifinal berth should the Blue Bulls win their final match.

In Cape Town the first 30 minutes between DHL Western Province and the MTN Golden Lions was dominated by penalties, which flyhalves Demetri Catrakilis and Marnitz Boshoff took advantage of to keep the scoreboard ticking. But the home team managed to get a break-through shortly before half time as Damian de Allende and Deon Fourie crashed over for tries to hand the team an 18-9 lead.

Western Province stretched their lead minutes after the break thanks to a try by wing Gerhard van den Heever and another penalty by Catrakilis. But the Lions clawed their back into the match in the fourth quarter with two tries by inspirational captain Derick Minnie to come within range of securing a bonus point for losing by seven points or less. The team was awarded a penalty late in the match, but rather than opting to kick for posts and reduce the gap between the sides to seven points, they kicked for touch and lost the ball in contact. Western Province took full advantage of this error to build phases on attack, which paid off as Michael Rhodes scored the bonus point try on the stroke of full time.

In Kimberley, four tries by Toyota Free State speedster Raymond Rhule, who made his way back into the team following an injury to star right wing Riaan Smit, set up the side for a morale-boosting victory against GWK Griquas. The first half was tight despite the Toyota Free State Cheetahs building up a 14-0 lead in the first quarter compliments of three Elgar Watts penalties and a try by Schalk van der Merwe. But Griquas tightened up their defence and hit back with a try late in the half to close the gap to 14-7.

Griquas did well to contain the Cheetahs in the opening exchanges of the second half, but the flood gates opened for the visitors 10 minutes in as they scored tries at will. So dominant were the side, they scored five second-half tries, while Griquas managed only two. The defeat for Griquas sealed their fate in the series as the last-placed team, which means they will play two promotion-relegation fixtures against the Pumas, who finished the Absa Currie Cup First Division league stages as the top team, to determine which team will feature in the Premier Division next season.

At Loftus Versfeld the Sharks held on for their seventh victory of the season despite two yellow cards. With the Sharks playing for a home semifinal and the Vodacom Blue Bulls desperate to win to stay in the running for a semifinal berth, the clash was expected to be hard fought, and it lived up to these expectations. The Sharks had the advantage in terms of territory and possession early in the first half, but they battled to breach the Blue Bulls’ defence, which resulted in the team having to settle for penalties. The home team, however, slowly clawed their way into the match as the half progressed, although similarly to the Sharks they battled to get over the tryline. In total Sharks flyhalf Fred Zeilinga kicked three penalties in the first half, while his Blue Bulls counterpart Handre Pollard kicked two, which handed the visitors a narrow 9-6 lead.

The second half was equally tightly-fought as the teams threw everything at each other. Another penalty by Zeilinga in the 44th minute extended the Sharks’ lead to 12-6, but a converted try by Blue Bulls centre Francois Venter edged the home team into the lead. Pollard extended their lead to 16-12 with a penalty in the 66th minute. But two late penalties by Butch James in the last 10 minutes, the second of which was in the 78th minute, dashed the Blue Bulls hopes’ of a victory.