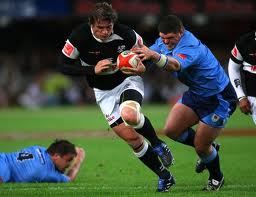 The Sharks and Toyota Free State Cheetahs this weekend climbed into the top two spots on the log table in the Absa Currie Cup Premier Division as favourable results pushed them ahead of DHL Western Province on the standings.

In an entertaining round, the Sharks thumped the Vodacom Blue Bulls 34-18 at GrowthPoint Kings Park, the Toyota Free State Cheetahs defeated GWK Griquas 40-20 in Bloemfontein, and the MTN Golden Lions and DHL Western Province played to a 31-31 draw at Ellis Park.

Western Province’s draw forced them two spots down on the log into third place, while the Sharks moved into the top spot for the first time and the Cheetahs moved into second place on points’ difference.

The clash in Durban proved to be tight despite The Sharks and Vodacom Blue Bulls adopting an exciting attacking approach. Such was the thrilling start Blue Bulls wing Akona Ndungane crossed the tryline in the 5th minute after rounding off a move from a fantastic rolling maul. Sharks fullback SP Marais hit back with the first of his team’s four tries two minutes later after gathering the ball from a charge down to level the scores at 7-7. With both teams attacking at will and putting their bodies on the line on defence, the only other points scored in the half were two penalties by Sharks flyhalf Fred Zeilinga and one by his Blue Bulls counterpart Handrē Pollard, who had a fair Absa Currie Cup debut.

The tightly-fought exchanges continued in third quarter as the teams battled to cross the tryline despite working their way into the opposition’s half. The Sharks, however, took the match by the scruff of the neck in the fourth quarter as they dominated possession and territory, which earned them three tries despite receiving a yellow card. Centre Heimar Williams crossed the line first after receiving a stunning pass by Keegan Daniel, followed by inspirational scrumhalf Charl McLeod who set the field alight as a replacement in his 50th Currie Cup clash. Marco Wentzel followed in their tracks in the 68th minute to secure their bonus point try. The Blue Bulls, however, fought back and earned the rewards with Ndungane crossing the line for his second five-pointer, but it was a case of too little too late for the Pretoria team.

In Bloemfontein a brace of four tries in 20 minutes by the Toyota Free State Cheetahs midway through their clash against the GWK Griquas set them up for their second bonus point win in four matches. Griquas’ ill-discipline assisted them as the team was reduced two 13 men at one point with flank Marnus Schoeman sin-binned and lock Rory Arnold red-carded for biting. The first 20 minutes proved to be a hard grind as the teams tried to use their physicality to gain an edge, resulting in penalties being exchanged. But the Cheetahs’ impressive phase play allowed them to break away in the 22nd minute with captain Boom Prinsloo crossing the tryline for the first of his two first-half scores. Raymond Rhule added another thanks to a stunning pass by Springbok prop Trevor Nyakane for a 22-6 half-time lead.

Cheetahs flyhalf Elgar Watts crossed the chalk for the bonus point try nine minutes into the second half following a fine display of team work and smooth passing. But a yellow card for Cheetahs lock Teboho Mohoje allowed Griquas to score their first try 52 minutes into the match. Marnus Schoeman received his marching orders next, but despite this Rory Arnold was able to score their second try. His celebrations, however, were short-lived as he received a red card for biting an opposition player after dotting down the ball, which paved the way for the Cheetahs to score their fifth try in the dying seconds.

In Johannesburg the MTN Golden Lions staged a dramatic comeback from 22-3 down to secure three log points from their clash against DHL Western Province at Ellis Park. The Cape side started the clash with a bang as centre Damian de Allende and talented wing Cheslin Kolbe crossed the tryline in the first 11 minutes in a stunning display of attacking rugby. Hooker Tiaan Liebenberg built on this in the 28th minute as he touched down for the third try and a 22-3 lead. Flyhalf Kurt Coleman, meanwhile, kept the scoreboard ticking with penalties as the Lions infringed at the rucks. But the home team hit back with Deon Helberg scoring the first of their four tries to add to an earlier penalty by fullback Marnitz Boshoff to trail 25-10 at the break.

However, the tables turned in the second half as the Lions were awarded a penalty try in the 46th minute after De Allende was ruled to have made a try-saving tackle from an offside position, which earned him a yellow card. The team, however, held the Lions scoreless despite having only 14 men on the field, while Coleman slotted over his third penalty. But tries by Lions flyhalf Elton Jantjies, who took advantage of an effective dummy pass, and looseforward Derick Minnie, put the Johannesburg team in the lead with 10 minutes to go. Western Province, however, were awarded a penalty in the dying minutes and opted to kick for goal, which Coleman slotted over to secure the draw.