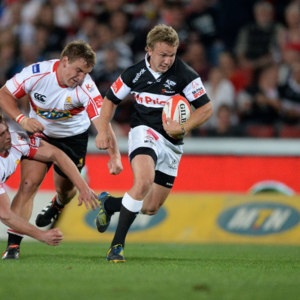 Sharks, WP book their semifinal spots with away wins

The Sharks and DHL Western Province this weekend cemented their Absa Currie Cup Premier Division semifinal spots and set themselves in good stead for home semifinals, while the Vodacom Blue Bulls reignited their semifinal chances.

In a weekend of away wins, the Sharks fought their way to a 31-25 victory against the MTN Golden Lions in Johannesburg, DHL Western Province pipped the Toyota Free State Cheetahs 29-27 in Bloemfontein and the Vodacom Blue Bulls thumped GWK Griquas 52-10 in Kimberley.

With these results the Sharks retained the No1 position on the log, while Western Province hung onto second place, although they remain level on 28 points. The Lions are seven points back in third position and the Cheetahs another four points back in fourth place.

The Blue Bulls’ victory, however, allowed them to reduce the gap between themselves and the Cheetahs to one point, meaning the teams could find themselves battling out for a semifinal berth in the last two pool rounds.

The clash at the Free State Stadium was nail-biting from the outset as both teams produced a solid performance. This resulted in the Toyota Free State Cheetahs and DHL Western Province being neck-on-neck until the last minute. The home team built up a 17-13 lead in the first half thanks to two tries by fullback Hennie Daniller to only one by Western Province wing Cheslin Kolbe, while both teams slotted over a first-half penalty.

The visitors, however, stepped up their performance in the second half and they did well to win turnovers at the breakdowns, in particular, while their flyhalves Kurt Coleman and Demetri Catrakilis kept the scoreboard running with penalties to cancel out the Cheetahs’ third try. Such was the closeness of the match, a try by Province’s Michael Rhodes and a penalty minutes later by Catrakilis pushed the visitors into a 26-24 lead. Cheetahs’ flyhalf Elgar Watts, however, cancelled this out with a penalty in the 73rd minute for a 27-26 lead. But Catrakilis saved the day for Western Province as he slotted over a drop goal two minutes from time to seal the 29-27 win for the Cape side.

The Sharks made their presence felt early in the clash at Ellis Park, with talented flyhalf Fred Zeilinga earning his team a 16-3 lead by the 20th minute thanks to two drop goals, a converted try and a penalty for a full-house of points. The Lions, however, clawed their way back into the match in the second quarter and scored two impressive tries by Derick Minnie and Warren Whitely as they opted for a direct approach on attack and dominated the scrums and lineouts. This combined with a two penalties by flyhalf Elton Jantjies allowed the home team to build up a 20-16 lead at the break.

But the tables turned for the hosts in the second half as they lost the ball in contact and conceded breakdown turnovers at will, which disrupted their momentum and allowed the Sharks to get onto the front foot. The Sharks scored two second-half tries to only one by the Lions, while Zeilinga added another penalty and conversion to increase his points tally for the match to 21.

In Kimberley the GWK Griquas and Vodacom Blue Bulls both used their forwards to gain an edge in the first half, which resulted in a physical and close opening 40 minutes. The Blue Bulls, however, did well to create try-scoring chances and they capitalised on this by crossing the tryline twice in the first half. Griquas, however, managed to get their hands on the ball late in the half and earned a penalty try for their efforts. The visitors entered the break with a 15-10 lead.

In stark contrast to the first half the Blue Bulls dominated the second half completely and ran circles around the hosts, which allowed them to score another five tries. Blue Bulls flyhalf Handre Pollard added to the score by converting four of the tries and kicking three penalties for a personal contribution of 17 points. This victory kept the Blue Bulls in the hunt for a semifinal place, while the defeat for Griquas means they have to win both their matches with bonus points while the Blue Bulls and Free State have to suffer defeats in both their remaining matches to sneak into the semifinals.