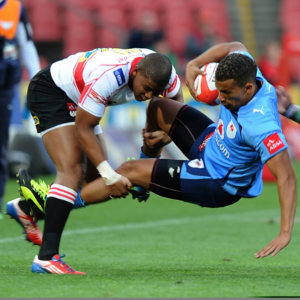 The Sharks and DHL Western Province this weekend strengthened their chances of home semifinals in the Absa Currie Cup Premier Division, while the Vodacom Blue Bulls and GWK Griquas continued their struggle to make their presence felt.

With only three pool rounds remaining the Sharks and Western Province need only two more log points to cement their semifinal places, while the Blue Bulls and Griquas face a daunting task to sneak into the semifinals after each side managed to secure only a bonus point this weekend.

In Saturday’s matches, the Sharks were emphatic in their dominance against the Toyota Free State Cheetahs in Durban which earned them a 50-26 victory and the top spot on the log, and the MTN Golden Lions powered their way to a 35-26 victory against the Vodacom Blue Bulls.

On Friday, DHL Western Province held on to a 19-13 lead despite a spirited effort by GWK Griquas in Cape Town to secure their fifth victory in seven matches.

At Ellis Park, the MTN Golden Lions dominated possession and did well to stretch the Vodacom Blue Bulls’ defence, which earned them an encouraging five tries. The fact that the visitors were reduced to 14 men for 20 minutes of the match following unnecessary infringements did not assist their cause, although to their credit they defended well when they were a man down.

The Lions started the clash strongly with Andries Coetzee and Jaco Kriel crossing the tryline in the first 14 minutes thanks to fantastic inter-passing and team work. Springbok flyhalf Elton Jantjies added a penalty for a 13-0 lead.  But nippy Blue Bulls scrumhalf Rudy Paige reduced the deficit to only six points after gathering the ball and dancing his way to the tryline.

The home team continued their dominance in the second half and reaped the rewards with three tries. But a late comeback by the Pretoria side which saw them retain possession and Springbok wing Bjorn Basson produce some magic following his return from the national team’s Castle Lager Rugby Championship tour, allowed the team to close the gap on the scoreboard. Basson scored two tries and centre Francois Venter one, which secured their bonus point, but it was a case of too little too late to keep alive their hopes of a victory.

The Sharks were in fine form at GrowthPoint Kings Park as they created try-scoring chances at will and capitalised on most of them to register their first 50-point score this season. In total the team crossed the tryline seven times, while the Toyota Free State Cheetahs ground out only two tries as breakdown turnovers and mistakes at crucial times disrupted their momentum.

Such was the high quality of the Sharks’ performance they secured their bonus-point try by the 44th minute and they continued to apply pressure until the dying minutes. The team’s attack and defence functioned well and they balanced this with solid set pieces. The return of hard-working Springbok flank Marcell Coetzee was also evident as he put his body on the line to earn the man-of-the-match award. These positives aside, the Durban team will have to improve their discipline with the semifinal-stages approaching as Cheetahs flyhalf Riaan Smit slotted over four penalties to earn his team a respectable score.

In Cape Town wet weather resulted in a tactical kicking duel between DHL Western Province and GWK Griquas and resulted in both teams playing a tight game when they opted to retain possession.  The visitors had the first say as flyhalf Francois Brummer kicked a penalty, but his Western Province counterpart Kurt Coleman cancelled out the lead with two penalties. With both teams struggling to gain momentum on attack, Griquas wing Nico Scheepers scored the only try in the first half, which handed the visitors a 10-6 lead at the break.

Western Province stepped up their performance in the second half by opting to retain possession, and with their confidence up scrumhalf Nic Groom dotted down their try in the 50th minute. The only other points in the half were a penalty a piece for the teams. Griquas, however, fought until the end and could have snatched a victory after stringing together several phases on attack in the dying minutes, but they were denied by the tenacious Western Province defence.